The Kachin Manaw festival, or manau pwe, is undoubtedly one of the country’s more spectacular displays of ethnic culture and solidarity. The annual festival, held at several sites in Kachin State in the days leading up to Kachin State Day on January 10, draws hundreds of thousands of revelers from the seven tribes that make up the Kachin ethnic group. 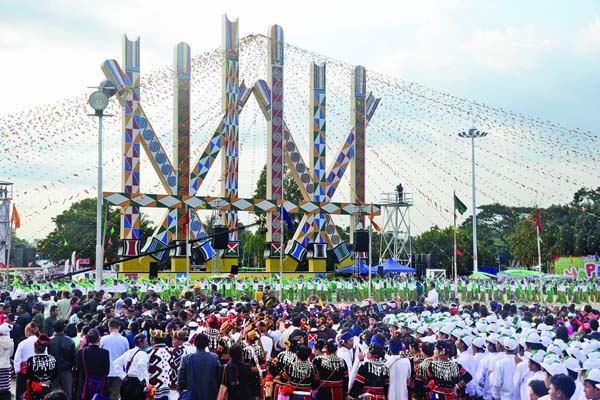 Occupying a large area of northern Myanmar, the Kachin are today mostly Christian but the Manaw festival harks back to a time when they worshipped only anirpist nat spirits. The festival is held to honour – or at least placate – the chief Kachin nat spirit, known as Karai Kasang. The Manaw dance is led by the dumsa, who is responsible for making contact with the nat spirits. In contrast, Kachin State Day is a secular celebration, marking the anniversary of when the Kachin agreed, in 1947, to join the soon-to- be-independent nation of Burma. The largest of the Kachin tribes is the Jingpaw, whose language is the lingua franca of Kachin State. 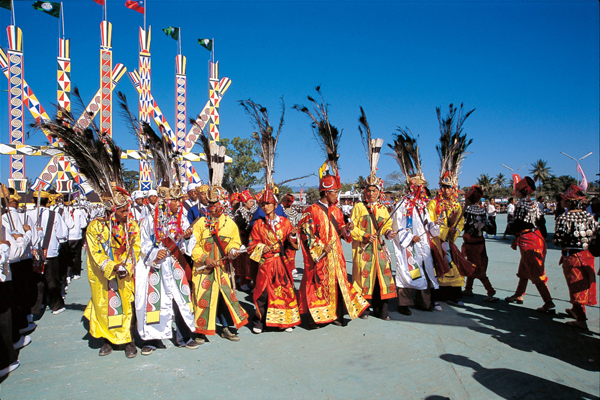 About 1 million Jingpaw live in Myanmar, while the large populations in China and India are evidence of the group’s migration into modern Myanmar from the Tibetan plateau. The most notable Manaw celebration takes place in the Kachin State capital Myitkyina, where in the past up to 200, 000 people descend for a week of festivities. Smaller celebrations take place in Bhamo, in southern Kachin State, and Putao in the far north. The Myitkyina Manaw was broadcast live on local television in 2011. In Myitkyina, celebrations take place on the Manaw field south of town, a large open space featuring elaborately decorated Manaw poles – each about 20 metres high, and resembling totem poles – around which the dancers parade. The dance procession is typically led by community leaders and is accompanied by loud drums that provide the beat. Both male and female dancers take part in the Manaw dance.
At the Manaw festival, the groups are distinguishable from each other through their own distinctive national dress, which is typically bright, adorned with metallic objects and features elaborate headwear. They also carry traditional items, such as swords, that are featured in the dances performed in front of the totem poles. These swords are normally heirlooms handed down from one generation to the next, and do not necessarily symbolise warfare: they also represent agriculture, through the clearing of land, and hunting, as they are used to cut up animal meat.
For years the festival was a mostly underground affair because of the Kachin Independence Organisation insurgency against the socialist government. However, after the ceasefire in 1994, the Manaw became not only an important cultural but also political event. Each January, the festival would bring together not only ordinary Kachin but also the local Burmese military commander and senior officials. from armed groups in the state.