The art of Burmese dance originated from the previous period of Buddhist era when Nat worshipping was always accompanied with dancing. The dance is very exalted and requires the performer to make difficult moves. The dance is presentable, gaudy costumes covered body, male and female dancers never touch each other when they dance together. Teens will be taught the Kabyalut – a traditional basic dance of Myanmar.

There is a very interesting dance in which the dancers make the moves like puppets, that is the reason why it is said that the dance of Myanmar is an imitation of puppets – the genre once replaced the dancers. The female dancers dressed the royal costumes, long-sleeved jacket, tie the waist, leng longyi flapping follow the steps. Male dancers dressed the silk longyi with jacket and white scarf scattered pieces of fabric sticking out like a leaf. The character’s role of other dance includes warriors, Zawgyi (shaman) and Nat.

Yein – is the famous dance of the annual Water Festival of Myanmar with the dancers – usually female, dress alike and perform the movements like the others. This dance was performed meticulously and monumentally in the opening of Seagame 27 in December, 2013 in Myanmar.

Hnaparthwa is a dancing performance with two people two girls or one man and one girl dance together. Elephant Dance Festival was held in the midlands and mountainous regions with the team of dancers control the elephant puppets made of cardboard, bamboos. 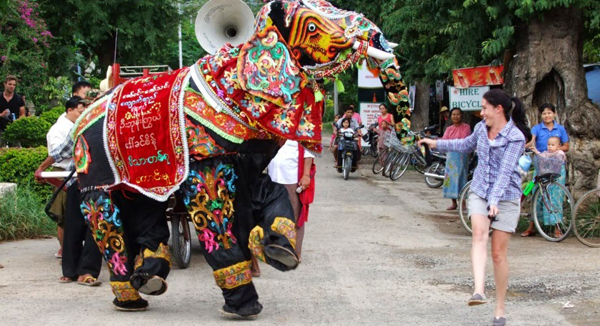 The famous Anyein is the dance form combines with Lupyetxen clowns laugh in performances expressing the sarcasm of current events and other topics, sometimes obscene. When the clowns is performing is the time for dancers at rest or dressing. Sometimes two or more dancers performed in turn. The entire dance lasted about two hours.
Many dances of the ethnic minorities in Myanmar are performed with swords or large and small drums. The dances of ethnic minorities are a small group of dancing, in which the young men and women dancing together is very rare.

The Memorable Experiences When Traveling in Myanmar

10 Best Dishes Should not be Missed When Travel to Myanmar