Just six miles (10 kilometers) from Kyaukse, a medium-sized town south of Mandalay, is a remarkable pagoda that, if not for a prominent sayadaw and the work of a team of archaeologists, we may never have known existed. Tamote Shinpin Shwe Gugyi sits at the center of three villages – Nyaung Pin Zauk, Kyaung Pan Kone and NgeToe – in the southeast corner of the ancient city of Tamote. It is beside the road from Kyaukse to Tada Oo, where Mandalay’s international airport is located. 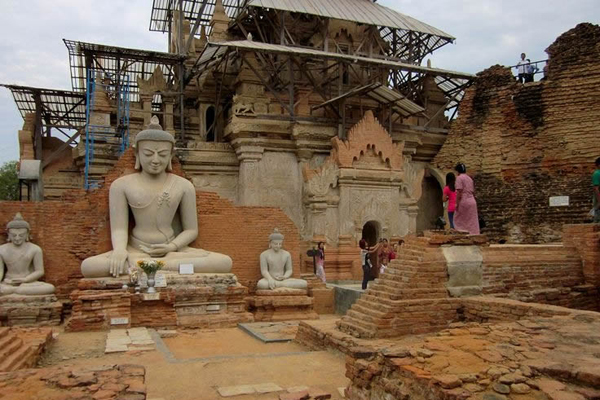 Built by King Anawrahta (1044- 1078), who is often credited as the founder of the Bagan empire, it was covered by a large stupa by King Uzana (1325-1340) during the Pinya period. By the time Sayadaw U Sandawbartha arrived at Tamote Shinpin Shwe Gugyi in the 1990s, King Uzana’s pagoda was little more than a pile of bricks. When the sayadaw began to clean up the bricks, he found a Bagan-era pagoda inside. Amazingly, it was full of decorations made from concrete. Tamote Shinpin Shwe Gugyi is built in a similar style to Thatbyinnyu Pagoda in Bagan. Ofa medium size, it is a double cave pagoda. Unlike virtually any other ancient stupa found in Myanmar, every single interior space is decorated with images made from concrete. Like most other Bagan-era pagodas, it has a prayer cave, a window in the middle room, and sein taung and balu pan swe flower motifs used as decoration. Tamote Shwe Gugyi not only has these features but also concrete decorations built in the kanote style
– which depicts convoluted lotus stems, buds and blossoms – and many other sculptures.
After King Anawrahta became king, he built his palace on the bank of the Ayeyarwady River at Bagan and founded an empire that would last several centuries. As the Kyaukse plain was a fertile area and provided much of the empire’s food, it was divided into 11 administrative districts, with fortresses built in each to maintain Bagan’s grip on the region. Tamote – one of the 11 districts – is near Kyaung Pan Kone village, on the eastern side of Panglong River, and covers about 25 acres.
The 11 districts are:
1. Pinleh (MyoTwin village, Myittha township)
2. Pyinmana (near Kumae, Myittha township)
3. Myitthar (Myittha township)
4. Yamone (near Sapar Taw village, Myittha township)
5. Myin KhoneTaine (Myin ChaeTaing, Kyaukse town-ship)
6. Pa Nan (near Pan Kwar village, Kyaukse township)
7. Tamote (near Nyaung Pin Zauk village, Kyaukse township)
8. Thin Taung (Thin Taung Gyi village, Kyaukse town- ship)
9. Makayar (near Aet Pya village, Sintgaing township)
10. Ta Pyat Thar (near Ywar Haung Kone village, Sintgaing township)
11. Kan Lu (near Latt Pan Chaint village, Sintgaing township)
King Anawrahta devoted much of his efforts as king to propagating Buddhism throughout areas under his control. In the Kyaukse area, he built nine cave pagodas alongside its many rivers. Tamote Shinpin Shwe Gugyi pagoda is one of these and was rebuilt as a two-storey cave pagoda during the reign of King Narapatisithu (1174-1211) in the late 12th century. The art and decorations found at the pagoda date to the 12th century, when Myanmar handicrafts were in their heyday. Nobody can say exactly why King Uzana built the 91 – foot long stupa in the style of Bagan’s Shwezigone Pagoda over the original pagoda during the Pinya period. What is known is that after more than six centuries the pagoda had become a big pile of bricks. When Sayadaw U Sandawbartha, who was born in nearby NgeToe village, moved to the area in 1993, he cleaned up the site and found the northern entrance to Tamote Shinpin Shwe Gugyi. One year later, in 1994, he found the face of a Buddha image in the main building. 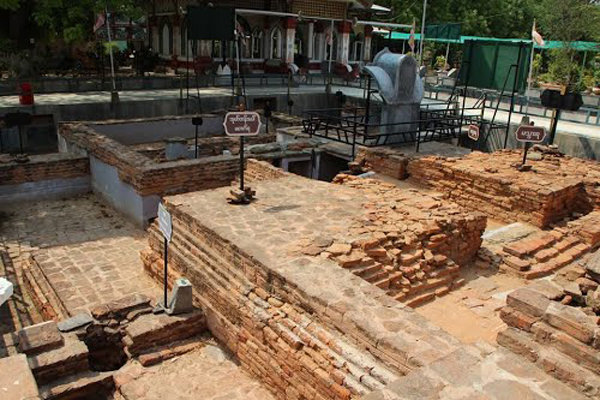 In 2008, the Ministry of Culture granted permission to renovate the pagoda. Since then, many people have donated their time to help clean up the broken bricks and reveal more of the original structure. I visited the site on August 19, 2009, and was astonished to see the detailed concrete artwork being revealed through the branches of a tamarind tree. The renovation has been led by Myanmar sculptor and archaeologist Tampawaddy U Win Maung. As important pieces of art were found, sculptors used clay molds to immediately make plaster copies, while artists made sketches for concrete art works. Meanwhile, hundreds of people carried bricks from the site by hand. The pagoda faces the north and includes a stone inscription made in the Myanmar year 718 – 1356 in the Gregorian, or Western, calendar – commemorating King Sinpyushin Kyawswar’s visit to pagoda during Pinya era and his donation to the site. Some of the art is unique and cannot be seen at other pagodas. As well as kanote, visitors will also find images of elephants, horses, owls, monkeys, birds, roosters, people and animist nat spirits. The pagoda also has a complete set of the Jarato, the 550 birth stories of the Buddha. In Bagan, these can only be seen at Ananda Pagoda.
Strangely, we have King Uzana to thank for preserving this rich monument to Myanmar’s ancient artistic prowess. Before building his sputa on the site, King Uzana covered the original pagoda with 4 inches (10 centimeters) of soil. This ensured that the rich concrete decorations, particularly on the exterior of the pagoda, remain in good condition today.