Mandalay is one of those palace names that evokes a feeling of the exotic, even if many people are not sure exactly why.
Some may know it from the work of famous writers, like George Orwell, who visited while living in nearby Katha, or Rudyard Kipling, who never visited but managed to write perhaps his most famous poem about it anyway.
Others may be familiar with Mandalay today as Myanmar’s second largest city, an important and growing trade centre connecting Myanmar and China, with consumer goods flowing in and natural resources flowing out. A few may even remember the name from other cultural icons, such as the 43-storey Mandalay Bay hotel on Las Vegas’strip, or a string of World War ll-themed Hollywood movies set in the vicinity of the city. 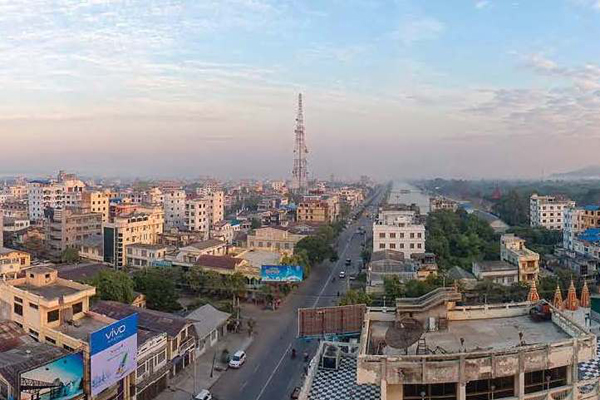 But these perspectives fail to do the city justice, and a closer look-indeed, a visit – is essential to understand the importance of Mandalay and the history behind the name.
The last two Myanmar kings made the city their home, granting audiences to European officials and Chinese merchants and subject chieftains from the Shan highlands to the east. The British, too, maintained a near 60-year presence in the city, cementing its place as the population and trade centre of upper Myanmar.
Part of the lure of Mandalay is its location, sitting far up river from the coast. While Yangon, the largest city in Myanmar today, is easily reached by ships plying the Andaman sea, Mandalay is situated some 440 miles (708 kilometres) from the ocean. Still, the city maintains a strong nautical tradition because it straddles the Ayeyarwady River, which has supplied the Myanmar people with water for their crops and a highway for transport for thousands of years.
While the area around Mandalay has been a population centre for at least 1000 years, the city itself does not date back nearly so far. Initially the most important urban settlement in the area was Inwa, which, founded in 1364, sits at the confluence of the Ayeyarwady and Myitnge rivers. lt remained the capital for much of the next 500 years, until it was moved to nearby Amarapura in 1841.

Yet Amarapura would not remain the capital for long. With much of southern Myanmar – including Yangon – controlled by the British following two earlier wars, the newly crowned King Mindon looked for a place to start again. The site he chose was only 21 kilometres to the north, and a few kilometres further inland from the Ayeyar- waddy River, under the shadow c prominent hill: Mandalay.
While the ruins of Inwa and Amarapura are a pleasant day trip from Mandalay, it is the leftovers from King Mindon’s capital that do the most to attract today’s visitor to the area. Prominent in the city are the massive red-brown walls | guarding the palace that are about two miles long on each side and surrounded by a wide moat. The palace itself was’destroyed during fighting between the British and Japanese in World War II, and the desultory rebuilding efforts do not do full justice to the monarchs who lived there, and referred to it as “The Centre of the Universe”. While much of the palace compound is today used by the military and as a result off limits to visitors, the rest is worth visiting to get a glimpse of the lost Burmese kings lounging on the Lion Throne.
Following the royal court in its short trip north to newly founded Mandalay in 1858 were the merchants, religious leaders and laypeople keen to be at the centre of the kingdom. Mandalay itself quickly flourished. King Mindon was of a religious bent; in 1871 he invited thousands of monks to the city to discuss religious affairs at the Fifth Great Buddhist Synod. 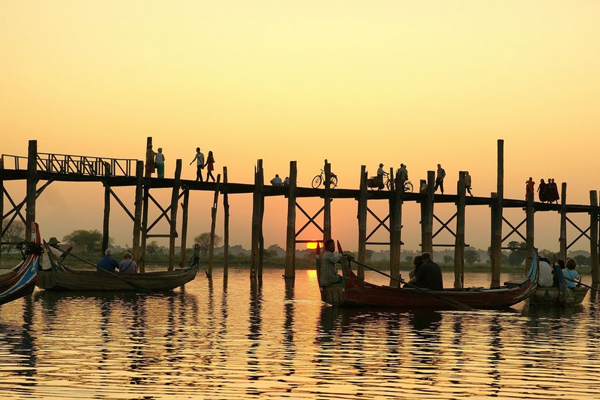 U Bein Bridge at Sunset, Amarapura

But he was also reform-minded and under no illusions about the threats the outside world posed to the Myanmar kingdom. He had inherited a country that was once the conqueror of eastern India, the scourge and eventual destroyer of the Thai capital of Ayuttaya in 1757. But a new power – Britain – was not only knocking at the door but had cemented its hold on the southern lands and cities of Myanmar.
In an effort to forestall calamity, King Mindon sent a prominent adviser, the Kinwun Mingyi. to call on several European nations, many of whom eyed with envy its rich resources, arable land and geographical location – the latter a potential backdoor connection to southern China.
For all his efforts at maintaining Burmese independence, though, King Mindon was to be undone by his relatives. He failed to name a successor as he grew older, and a variety of courtiers and relatives plotted and schemed until the pliant Thibaw was named king when Mindon was near death in 1878. Thibaw had attended a modern, European-style school as a child. 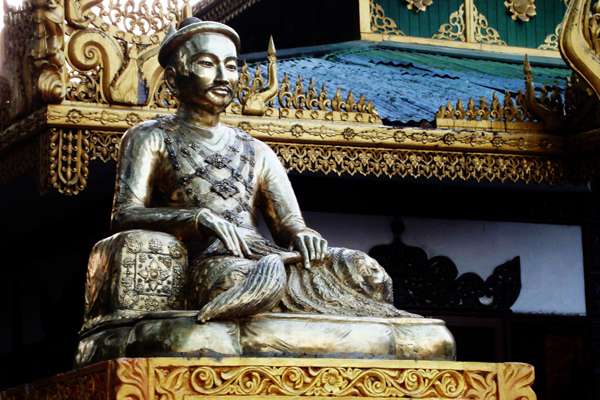 Statue of King Mindon at Mandalay

He was said to wield an effective cricket bat and be thoughtful and intelligent. Nevertheless, he quickly fell under the sway of his queen, Supayalat. In a move that shocked European nations and galvanised international public opinion against him, 31 of King Mindon’s 48 sons and nine of his 62 daughters – all potential rivals to Thibaw – were killed and buried in scarlet-coloured sacks outside the palace grounds. Accounts differ as to whether these brothers and sisters of King Thibaw were strangled, beaten or trampled to death by the royal elephants, but the result was beyond doubt.
While Britain’s public in particular reacted strongly against the killings, its leadership was equally concerned about French designs on the region. Already ensconced in nearby Laos, Cambodia and Vietnam, local French representatives were thought to be working hard to sway Thibaw into their camp – a situation seen as intolerable by their British rivals. However, in the same year as Thibaw’s culling of his relatives, Britain was fighting the Zulu war in South Africa and facing disaster with its Afghanistan campaigns, forcing immediate action to wait until there were fewer distractions.

British designs on KingThibaw’s kingdom waited until 1885. Under the pretext of a dispute over the payment of fees by British-owned teak company Bombay Burmah Trading Company, Lord Randolph Churchill’s government demanded Thibaw effectively surrender his suzerainty or accept war.
Unwilling to yield and confident in his army’s ability, King Thibaw chose war. Yet his confidence was misplaced. Although reports of numerous victories filtered to Thibaw as he sat in his palace in Mandalay, these reports – full of the bravery of his generals and soldiers – were completely divorced from reality.
In actual fact, British Major General Harry Prendergast was sailing up the Ayeyarwady river with a flotilla, barely slowed by the opposition even at the most defensible points in the river. Within the month, King Thibaw could hear the cannon fire approaching as Prendergast’s flotilla sailed past the ancient capitals of Inwa and Amarapura, belying the triumphant reports of his generals and making clear his defeat. 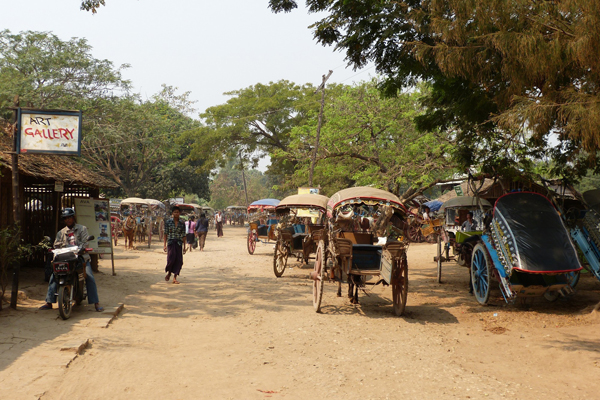 The crowded road in the city of Inwa, Mandalay

On May 28, 1885, King Thibaw surrendered Mandalay to the British. Thibaw, the last of the Myanmar kings, was deposed, and he sailed into exile in India, where he would spend the remainder of his days. Looters quickly ransacked the palace, and Mandalay’s relatively brief tenure as the capital of Myanmar was over.
Without the royal court, Mandalay would soon fade in importance, particularly relative to the more accessible Yangon. It remained an important commercial centre, however, and still counts itself as Myanmar’s second largest city.
Although the city has changed drastically since the days of King Thibaw, with many of its historic buildings falling victim to development, disasters and war, it is still possible to wander its streets, hear the din of the markets, see thedisplays of traditional goods, and understand why the name Mandalay calls to mind an exotic, ancient place. 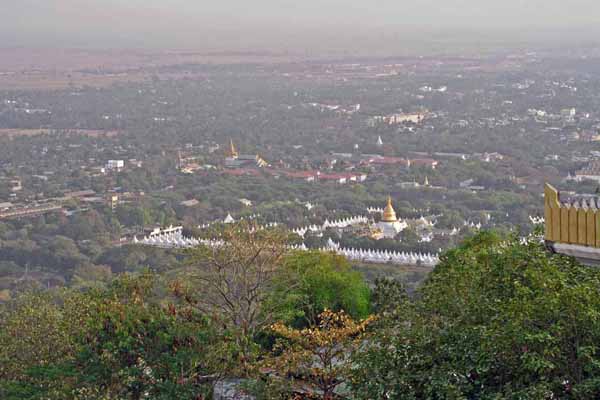 6 Reasons Why You Should Take Myanmar Tours This Summer