You have set your foot on Yangon, the commercial and spiritual heart of the country, seen huge serene Inle Lake, viewed the spectacular ancient city Bagan and immersed in rich culture land of Mandalay. So what is else to visit Myanmar for the second trip in Myanmar to deeply understand the culture and history of amazing land, ancient Burma.

Mrauk U
Situated on a rocky plateau relatively isolated in comparison with other famous destinations in Myanmar, Mrauk U, an ancient and abandoned city, nowadays is becoming a major archaeological and touristic site in Myanmar. For those who have special interest in history and culture, this area would not definitely disappoint you. Mrauk U is renowned for hundreds of ancient temples are scattered over a large area. These temples were made of hewn stone bricks, not mud and clay bricks like temples in Bagan, to combat strong winds. The most outstanding ones around them are Htukkanthein temple, Koe-thaung temple, Andaw-thein, Lemyethna pagoda, Ratana and Shite-thaung temple that all contain considerably archaeological and religious values.
How to get there?
To get to Mrauk U, most visitors first fly to Sittwe, then take the boat up the Kaladan river. Sittwe airport is less than two kilometres from the centre of town and the jetty for Mrauk U. Taxis should cost no more than K3000; tuk-tuks should be less. 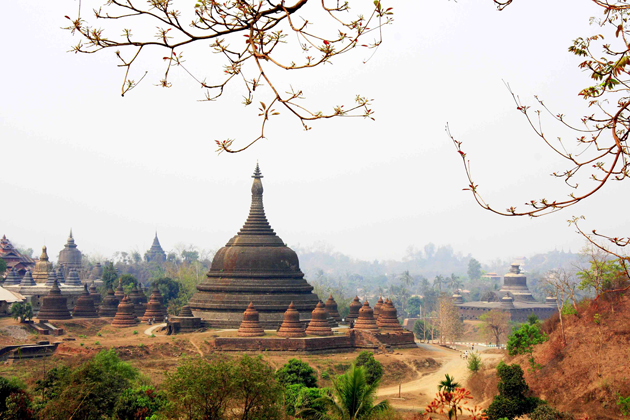 Forgotten land of Mrauk U

Amarapura – The immortal city
Amarapura is also known as The City of Immortals in prosperous times of the past. Unlike Mandalay, where the old walls of the Royal City and the Moat are still seen, other than a few indications of where the palace walls stood, the four-corner pagodas, the Watch Tower and the Treasury (which are masonry constructions), Amarapura now does not remain some historical site . In this area are located the tombs of the two Kings – Bodawpaya and Bagvidaw – carrying the following stone inscriptions in English.
Some must-see places in Amarapura:
Wooden bridge-U Bein, Mahar Gandar Yone Monastery, Kyauktawgyi Temple
How to get there?
A one day tour (by car) to Amarapura, Sagaing and Inwa will start from your accommodation in Mandalay and typically last from around 9am to 5pm. Alternatively, you can take a half day tour to Amarapura alone. 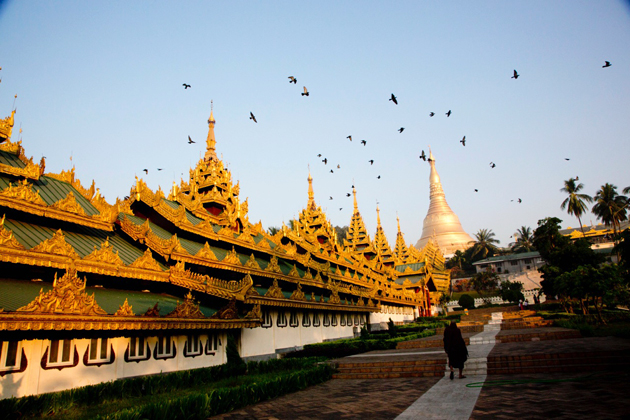 Kyaikhtiyo Paya (Golden Rock)
Kyaikhtiyo Pagoda is one of the most iconic locations and also one of its most significant Buddhist sites in the country. This small pagoda is settled on the top of a golden rock with gilded appearance created by generations of male pilgrims. Interestingly, male travellers can join pilgrims to add to the golden rock’s lustre, but women must stay a small distance away.
It should be noted that all travellers in the vicinity are expected to adhere to strict and respectful dress codes. This site is reached by trekking up from the starting point in the town of Kinpun. The full eleven mile hike takes at least four hours, though many take trucks as far as they can, which shortens the hike to around an hour. Those who feel unable to complete the hike can even be carried up by sedan chair.
How to get there?
It is better for tourists to take a trains to arrive in the nearby town of Kyaik Hto. From where you can take a taxi, motorbike taxi or pick-up to Kinpun, the ‘base camp’ village for Mount Kyaiktiyo. The journey takes 20 minutes and costs around K3000. 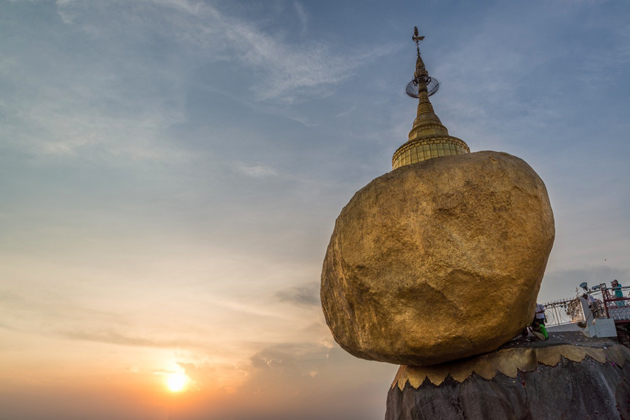 Hpa An
The capital of Karen (Kayin) State, Hpa An is a picturesque town located on the eastern bank of the Thanlwin (Salween) river, about 270 kilometres east of Yangon. The setting itself, the surrounding caves and mountains to explore, and the laid back atmosphere are the highlights of the area.
Hpa An (sometimes spelt Pa-An and pronounced Pah-Ann) is surrounded by dramatic karst mountain scenery which protrudes from the surrounding plains, and many of these mountains contain large and religiously important caves. Nevertheless, the operation of some open-cast mining in the area, doing permanent damage to this unique landscape – but there remains much to enjoy, and the most significant highlights are the beautiful, sacred and monolithic Mount Zwegabin (sometimes spelt Zwekabin) and Sadan cave.
Mount Zwegabin can be found 16 kilometres south east of Hpa An. If you want to climb Mount Zwegabin, there are steps all the way to the top but it is hard work, particularly in the heat – and the steps are in varying degrees of repair! It takes two to four hours to get to the summit, depending on your pace; there are people selling water and other refreshments on the way up. The gorgeous monastery and pagoda at the top of the mountain are a delight, and the canteen there serves a fantastic wide range of food; the summit also offers spectacular views of the surrounding mountains and plains
Besides, nearby to Hpa An, it is easily recognized Sadan Cave, which opens into a gigantic cavern filled with Buddhas and pagodas and can be walked all the way through to the other side, under the mountain. It is truly stunning, and returning you can take a small wooden ferry back under the mountain. 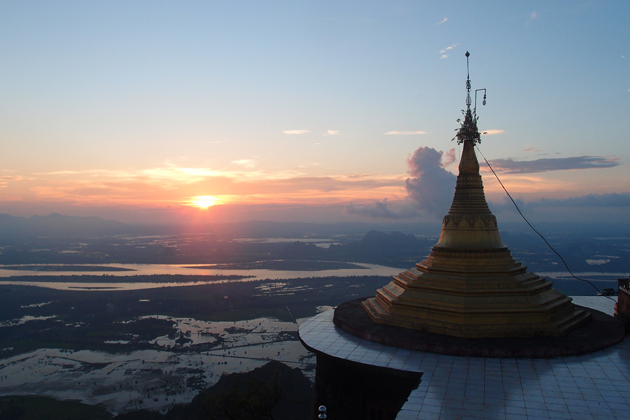 Sunset over Mount Zwegabin, Hpa An

How to get there?
The river journey from Mawlamyine along the Thanlwin River is a beautiful one, taking in local riverside villages and karst mountain scenery; you can get a small fast boat to Hpa An for K10,000 (since the building of a new road bridge, the government ferry from Mawlamyine no longer runs).Boats typically depart Mawlamyine at 8.30am and arrive in Hpa An at around 12.30pm; tickets can be bought at at guest houses and hotels, or at the Strand Road jetty booking office in Mawlamyine.

Migun
Mingun is a small town in Sagaing Region, north-west Myanmar (Burma), located 11 km up the Ayeyarwady River on the west bank from Mandalay. If you are interested in local custom as well as history, you definitely miss one of the biggest stupa in the world, the Mingun Pahtodawgyi. This place is best known for its gigantic, unfinished stupa which was meant to be the largest in the world (at a projected height of 150 metres), but now lies ravaged by earthquakes on the western banks of the Irrawaddy.
The structure is a striking sight with panoramic views from the top. Although there are signs telling you not to climb the stairs due to the damage and cracks, rarely do the locals deter visitors from doing so and sometimes encourage it; as with all pagodas, shoes must be removed and children will sometimes offer leaves to step on in order to protect your feet from the intense heat.
Another two highlights in Migun are recommended: Stupa Pondaw Payand and Hsinbyume (Myatheindan) Pagoda, a white pagoda that is quite different in design and style from most pagodas in Myanmar. It is named after a princess who died in childbirth, and was built in 1816 and restored in 1874, after suffering earthquake damage. 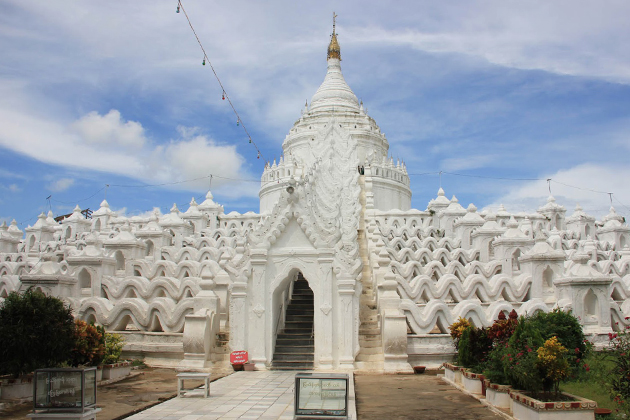 How to get there?
To reach Mingun, you can take a ferryboats across the river Ayeyarwaddy and takes 1 hour for up-river and 40 minutes for down-river. It is about 11 miles from Sagaing and you can reach there by road. It takes about 30 minutes.

Sagaing – City of Bridge
Located on the western banks of the Irrawaddy River, opposite Inwa and 21 kilometres south west of Mandalay, Sagaing is another of Myanmar’s ancient capitals, famous for its many hundreds of white, silver and gold pagodas and monasteries that dot its hilly landscape.
Your Myanmar tour will be much more fascinating if you plan to head off Sagaing city to view some stunningly gorgeous bridges. Some significant bridges: Yadanabon Bridge, Inwa Bridge. From both places, you can easily see the panoramic view of the city as well as witnessing the beautiful sunset. 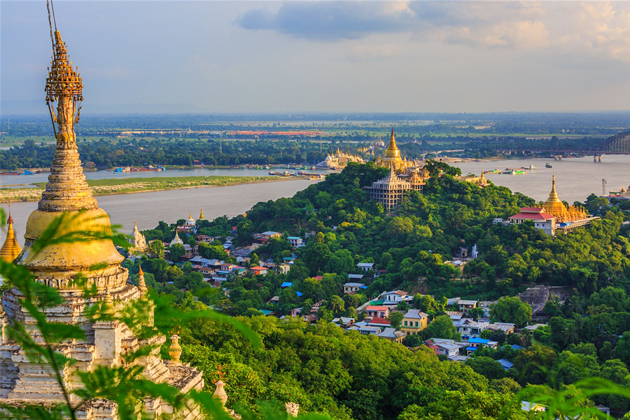 How to get there?
You can hire self-drive motorbikes from around K15,000 per day at a number of places in downtown Mandalay, including Mandalay Motorcycle Rental.

Pyin Oo Lwin (Maymyo) – The Temperate area in Myanmar
If you are aspiring to get away from the tropical climate in Myanmar, Maymyo is definitely an appropriate place for you. Maymyo, 3481 feet above the sea level, and taking its name after a Colonel May of the 5th Bengal Infantry Regiment stationed there in 1886, is delightfully perched at the head of a valley. It used to be a summer resort of the British Government in Burma and though it has now lost its prominence as a summer capital there is no summer migration of the Burmese Government any more – it retains its color, mainly drawn from its natural surroundings and beauty
Besides, thirty-five miles on the Maymyo-Lashio Road there is the Goteik Viaduct, between two forest- studded plateau of the Shan Hills and across a deep gorge, a landscape of exotic tropical exuberance.

How to get there?
Many people opt to take a shared taxi from Mandalay or will cost around K10,000 per person if bought locally. Other options from Mandalay include a cheaper, but less comfortable, pick-up, or self-drive motorcycle, which can be hired from Mandalay Motorcycle Rental. It is also possible to get a taxi from Mandalay airport, which is two hours from Pyin U Lwin and costs around K60,000.

Chaung Tha Beach
Close to Yangon, Chuang Tha beach is famous for middle households from urban areas in Myanmar. This wonderful beach is little less beautiful than Ngapali Beach or Ngwe Saung Beach, but the beach is still a nice place to visit in Myanmar with white sandy beaches, there are a few hotels stretching nearby, but on weekends or holidays, this beach always full with tourists from the cities.

How to get there?
You can take a car or minibus (with driver) from Yangon to Chaung Tha, which will cost around $288 for a one-way trip (less per person if in a larger group).

Best Places for the First Trip in Myanmar