Burmese practicing Buddhism, traveling any cities or towns throughout the country, you will see there are at least one temple and a Buddhist monastery. That’s the main religion of Myanmar and has great influence throughout the country, the lives of all the people not to leave the Buddhist rituals. 3 months of the rain season in Buddhist Lent is also written on the cathedral of Myanmar that is equivalent to the period from July to October. During the time, activities such as including vegetarian activities, marriages, moving house are often delayed.
In Myanmar, 99% of The Buddha followers are Burmese, Shan and Karen. Myanmar has about 500,000 male and female monks. Buddhism in Myanmar is the Theravada line, the primitive Buddhism line. The practice of Buddhist monks has similarities like a neighbor country such as Thailand, Laos, Sri Lanka, and Cambodia: Buddhist monks are not in a monastery but begging for food in the morning every day, non-vegetarian and only eat in the morning before noontime. 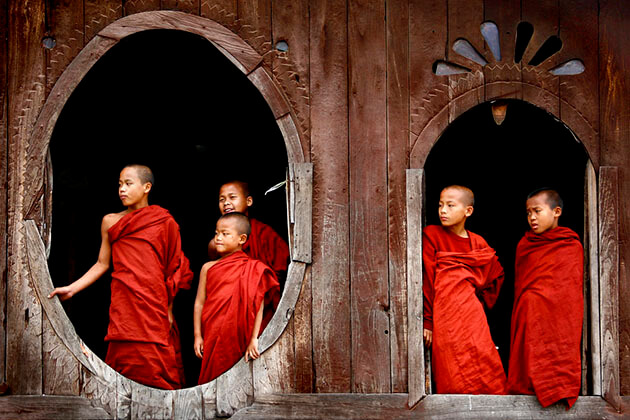 Under the reign of Prime Minister Ne Win, Buddhism in Myanmar had been brought into the national religion under the Constitution, but the next military junta in Myanmar eliminated this to ensure equality of religion.
Myanmar has thousands of temples, towers, and pagodas scattered across the country. Therefore, as well as Cambodia, Myanmar is also known as a pagoda country.
Temple is most concentrated in the city of Bagan, consisting of more than 4000 temples, pagodas, and stupas in an area of about 40km2. Many temples and pagodas that were built in the early Bagan era (17th century).
Many temples in Myanmar are often built on mountain tops above sea level thousands of meters to store and preserve relics and other sacred places. The stupas store relics are the cone-shaped monolithic structure with a treasure chamber below. The area surrounding the stupa is for prayer, meditation, chanting or incense offering.
At the entrance of the large temple and pagoda, there are usually many stalls selling fresh flowers, foliage, candles, golden sheaves, umbrellas, colored-paper small fan to offer to the Buddha. Shoes must be removed from the cross outside when entering the temples. 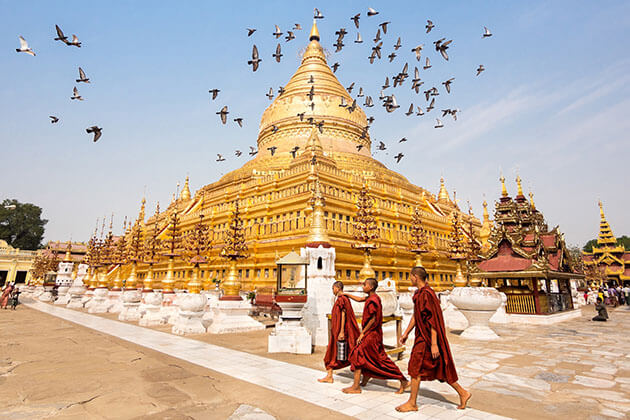 Myanmar has a lot of monasteries – the residence of the monks. The domestic and foreign Buddhists often go to the monastery to show respect and offer alms, such as food, money, robes, and items for the monks. Buddhists can stay all week, all month, all year in a monastery to learn how to meditate, listen to sermons or study the Dharma. Many religious rituals, including ceremonies and sacrifices… which is organized solemnly at the monastery.
Some areas in the monastery banned women. At the annual summer vacation, students aged 6 to 16 years old also gather here for the hair-cut ceremony, change clothes and take a retreat about 1 month to learn the precepts, listening to sermons and meditation.
Shwedagon Pagoda (Golden Temple) in Yangon is the most beautiful and largest stupa in Myanmar, was formed in 2500 years ago and have been repaired by the feudal dynasties of Myanmar gradually. Shwedagon temple is located on a high and wide hill. The temple mounted atop with many diamonds, rubies, jade and precious stones sparkling in the sun during the day and electric light at night. 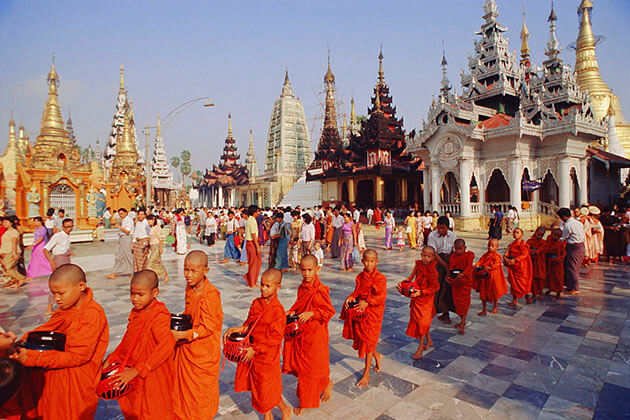 Kyaikhtyo Pagoda in Mon State is a unique wonder of the world. The pagoda was built on a yellow large rock protruding on a high cliff looks very spectacular.
Myanmar has many Buddhist universities in large cities, where has been training high qualified professor of Buddhist study. International Buddhist University in Yangon, Myanmar is built for students from countries like Vietnam, China, South Korea, Sri Lanka, Nepal, Thailand, Cambodia, and Laos… with free education from undergraduate to doctorate.