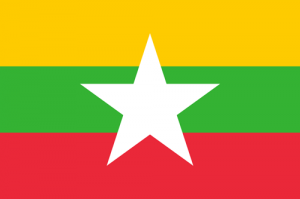 The flag of Myanmar (Burma) was used the date of October 21, 2010. The flag has three horizontal stripes from top to bottom including yellow stripes – symbolizing unity, striped green – symbolizing peace and beautiful nature, and striped red – symbolizing courage and decisiveness. The white star located in the middle of the flag. No official explanation three colors represent what three factors. This flag has been replaced for the old flag from October 21, 2010.