Mrauk U is the city where famous archeological site existed in Northern Rakhine State. Significant evidence of golden days of the ancient city from AD 1430 to AD 1785 still lies in the city and that is the main attraction for  Myanmar tour packages for both domestic and worldwide visitors.
Every single place of the archeological site also has the story to talk about the history of the building, the person who built those building and the objective of developing those areas.

There are legends even concern with the name of the city called Mrauk U. Some said that there were a monkey and a peacock lived together as a couple of friend in the forest where Mrauk will develop. One day two monks came to that forest and the monkey donated the egg of peacock to the monks. The monks foresaw that this area would be developed as a crowded city that called Mrauk U (Monkey Egg) in the future and the monkey and the peacock will be born as human and become the king in that city.
But some people assumed that Mrauk U Existe in the North of Long Kyat city which is the capital before Mrauk U. That why in the city got the name Mrauk U (city existed in the Northern edge)
Most of the temples in Mrauk U were constructed by gray sandstone and it is different within Bagan temples where mostly build with the brick.

Best Places to Visit in Mrauk U

Story of Buddha, flowers, animals, dancers, singers, playing martial art and various sculptures are crafted along the stone walls of Shit Thaung Temple, one of big temples in the city, which is constructed on AD 1538 by King Min Bar Gyi. The history of the Shit Thaung Temple was written that 84,000 each of the corpus of Buddha teachings. 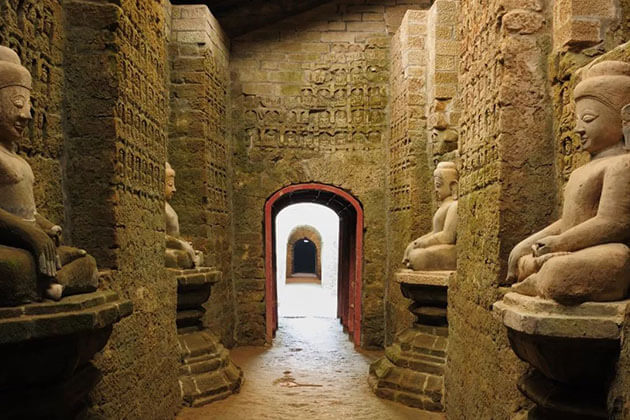 Koe Taung Temple is the good deed of King Min Tikhar, son of King Min Bar Gyi. It is the biggest temple that includes passages in Mrauk U. It had five terraces and two passages. Now those passages are collapsed. Story of the construction of the temple said that King Min Tikhar became il shortly after he became a king and the advisers of the king suggested to construct temple where enshrined 90,000 Buddha relics for king’s recovery. That why the temple name is called Koe Thaung (means 90,000). It s also called “healthy long life, Koe Thunag Temple” referring the objective of temple construction.
There were total 90,000 small pagodas and Buddha images in the temple that constructed on AD 1553. Small Buddha images and beautiful sculpture are crafted along stone walls of passages and bigger sitting Buddha images also put on the stone altar. Because of its large volume and design, Koe Thaung temple is similar to Borobudur in Yogyakarta in Indonesia.

Htukkanthein temple is located near Shit Thaung Temple. It is constructed with the objective to protect the Mrauk U city according to the traditional beliefs. The design of the temple which situated on the hill looks like huge supporting frame of a house. Stone staircase with high steps is needed to pass to reach the terrace of the temple.
The temple has two spiral tunnels that lead to the shrine in the upper story of the temple. The entrance of the tunnel is narrow but it becomes wider inside. The floor and roof of the tunnels are made with sandstone and Buddha images are put in the shrine area along the stone wall. Images of staff of various ranks of Rakhine King are sculptured beside each shrine. Those images show the cloth design of mid-Mrauk U area. Those sculptures are painted with colored ceramic and paint still last in some sculptures nowadays. The huge temple is long 11o feet in South-North direction. 137 feet in East-West and it has 64 feet high. It is one of the best places to enjoy the sunset of Mrauk U. 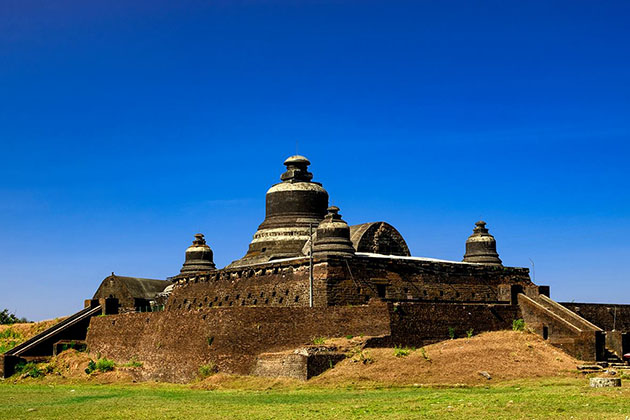 The misty morning is another attraction of the city. down that completes with mist among mountain ranges and pagodas is a kind of art.
U Mya Wah mountain that high about 200 feet are one of the best places to catch photos of famous misty down of Mrauk U. That mountain exists in the area that far less than half-mile in the North East of Mrauk U old palace. There is U Mya Wah pagoda at the top of the mountain.
U Mya Wah is a famous advisor of King Min Bar Gyi and also the cousin of the king. One day, U Mya Wah calculated the fortune of Mrauk U city and his predictions showed that a man who was born on Thursday needs to sacrifice his life for the sake of long-lasting of Mrauk U city. So, he sacrificed his own life. After U Mya Wah dead, King Min Bar Gyi made good dead for him and constructed the pagoda on 1537 and it was renovated for four times later.
Every step along Mrauk U waits with interesting places, legends, and beautiful art and culture that it will not be enough for visitors to explore them in one time. 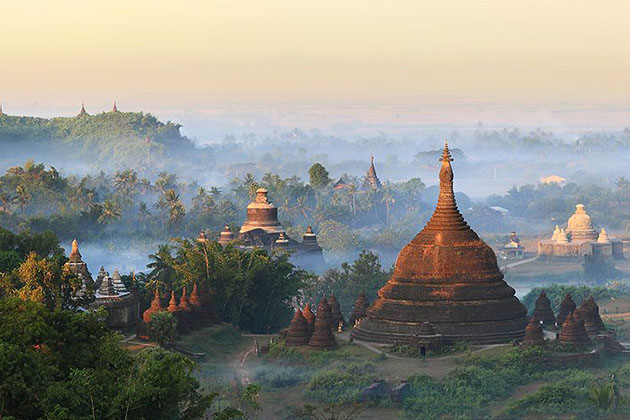