Myanmar Longyi, along with the country’s longtime history, art, and heritage sites has contributed to the richness of the Burmese culture that will grasp your attention whenever you find yourself in Myanmar tours. With just a piece of fabric grasping on the lower part of the body through time, the longyi has made it become an incredible pattern of Myanmar traditional costume for both men and women. In this article, we are going to find out the secret of Myanmar quintessence through Longyi, about why it has been worn for centuries by the Burmese people. 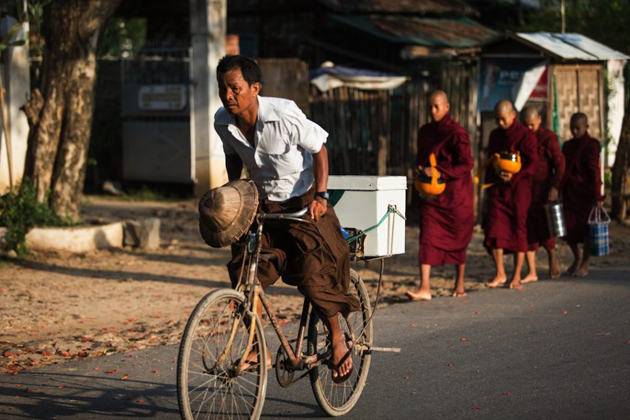 The dress is a long cylindrical piece of fabric which is about 2 meters long and 80 centimeters wide. Worn by both men and women in Myanmar, longyi is an integral component of the country’s national costume. Men’s wearing is different from that of women in terms of dressing way and pattern. It is not difficult to wear a longyi due to its “cylindrical tube” which runs from the waist level until the ankle. The top of the costume is tucked in at the waist, especially for women.

This traditional costume is particularly called “pasoe” for men and “htamein” for women. While male fold up and knot the garment elegantly in front to fit with their body; females pull all of the cloth to one side, fold back and tuck into the opposite. There is a 5-inches-wide black cotton strip tighten at the top of the skirt called “Ahtet hsin”, which is seen as the waistband, helping tighten the longyi, especially ones made from satin or any kinds of soft fabrics.

The most common masculine models are checks, squares, and vertical stripes or horizontal circular bands. Sometimes they wear the silk “acheik” on ceremonial occasions, which is known as a royal design for both genders as well as a kind of wave pattern inspired by the ripples of the Ayeyarwady River. Besides, there is a wider range of choices for women. The patterns could diverse among stars, checks, stripes or even teardrops with all sizes and colors. Some prefer self-plain textiles.

The upper garments to wear with longyi are varied. To men, instead of wearing the traditional long shirt of Myanmar in the old day, they now switch to white stiff-collared or T-shirts as casual wears, which somehow look like western style. On several occasions, they are supposed to put on outside the shirt a jacket with pockets and never-buttoned-buttons in front. Women’s top wear, however, is a little different with a wide range of designs. It used to run at the waist level, showing the “Ahtet hsin”; but now it is longer to cover that black strip. There also have buttons of various shapes and colors, but they are just on one side of the top wear. And as men do, women must have a jacket outside informal events. 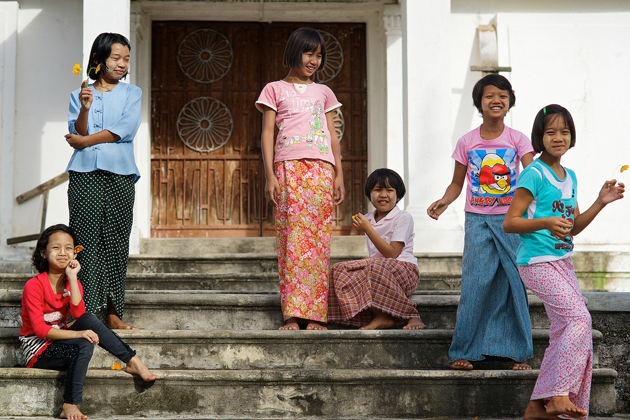 It is obvious that nowadays there exist numerous models of longyi, like splitting at the side, front or back. They may be shorter than the traditional. However, nothing can substitute the costume. Both tourist and Burmese people still favored the national costume because it symbolizes Myanmar lifestyle, tradition, and culture. It can be seen wearing by foreigners with excitement on the streets in big cities like Yangon.

How To Wear a Longyi

In fact, it is not difficult to wear the longyi, you can wear it as a normal skirt or even more with a pocket to carry your necessary items. You can follow these following guides to tie the longyi as you want.

It is done! But wait, if you want to create a pocket within your longyi, when grasping two laps, pull them and wrap the longer right lap around the left to form a small pouch with the left lap in front of your abdomen.

Where To Buy a Longyi in Myanmar?

Locals buy the cloth and makeup longyi by themselves or by a local tailor. Tourists are suggested to buy silk fabric with high quality as the local Burmese, then have the tailor give some adjustments before creating one. If you are in Yangon, you can find a good tailor in the Bogyoke market, cause they can recognize and offer what will suit with your appearance. You may need to pay $15-30 each. If you are in Mandalay, Thein Nyo Silk workshop is highly recommended for you to purchase the various types of longyi. The price arranges at around $15 to $100.