In the transition of expanding the country to the outside world, Myanmar (Burma) is a wonderland that enchants the heart of tourists with myriads of things to see and discover in the historical sites throughout the country. Together with the ongoing modern infrastructure, the heritage sites are always an allure to numerous people who hope to unlock the mystery. If you are looking for a list of UNESCO historical sites to visit in Burma tours, this article will fulfill your exact need!

Situated in the dry area of Irrawaddy River basin in Mandalay Magway, Bago, Pyu Ancient Cities of Hanlin, Beikthano and Sri Kestra have been recognized as world heritage sites since 2014. These cities consist of the remains of three brick. They reflect the Pyu Kingdoms that flourished for over 1,000 years between 200 BC and AD 900.

On Saturday, July 6, 2019, Bagan Archaeological Area and Monuments has been officially named as a UNESCO Heritage Site at a meeting of the UN’ cultural body in Baku, Azerbaijantentatively. Previously, it was listed into UNESCO world heritage sites since 1996. The site, which was the first mighty kingdom, existed between the 11th and the late 13th century. The site consists of more than 2500 Buddhist monuments (temples, stupas, monasteries, etc); several of these monuments are still highly venerated by the population, and attract numerous pilgrims and devotees from all over throughout and maintenance. The frescoes inside over 300 temples here form a unique corpus of paintings of that period in southeast Asia.

Considered as one of the tentative UNESCO world heritage sites since 1996, Padah-Lin Cave is an important archaeological place in southern Shan State in the Taunggyi district. Padah-Lin encompasses one major cave and a nearby rock shelter where the paintings are. The paintings were only explored by geologist U Khin Maung Kyaw in 1960. Charcoal pieces that were found in the cave during initial excavations from 1969-1972 have been carbon-dated to 13,000 years old.

Ancient cities of Upper Myanmar: Innwa, Amarapura, Sagaing, Mingun, Mandalay.
Being a part of the tentative list of UNESCO world heritage sites since 1996, the four ancient cities close to Mandalay feature an impressive variety of fantastic sites and monuments. Throughout Myanmar’s long history, capitals were moved many times for a number of reasons. Changing the capital related to the eradication of wooden palaces, wooden monasteries, moving to the new capital and rebuilding them there. Except for Mingun, the cities served also as state capitals over the period from the 14th and 19th century after the demise of Bagan.

Having been a part of the tentative list for UNESCO world heritage sites since 1996, Mrauk-U is renowned for 200 Buddhist monuments which were erected between the 15th and 16th centuries AD. It is the capital of the first Arakanese Kingdom, situated between the deltaic plain and the Arakanese mountains. The religious monuments in different states of maintenance and have no equivalent in the area. The Mrauk-u kingdom took on an important role in the history of trade and warfare in the Bay of Bengal and was the seat of intense cultural and religious interaction between Hinduism and Buddhism.

Having been on the tentative list for UNESCO world heritage sites since 1996, Inle Lake is situated in central Shan Plateau. It is a stunning highland lake, 900 meters above sea level, 22km long in length. The lake is renowned for the dwellers with their leg rowing. Leg rowed traditional boats are the main ceremonial attractions of the Inle Lake. The fishermen, using a mesmerizing one-legged paddling technique, you won’t see anywhere else in the world. Moreover, cruising along channels hemmed in by floating gardens is also sublime. It can be said that this life on the shallow, 13.5-mile freshwater lake is utterly alluring. 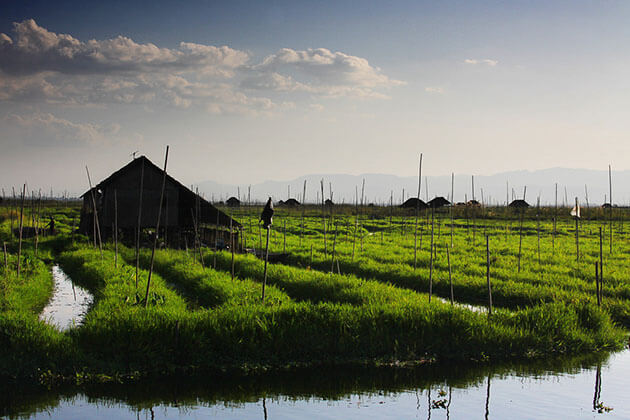 Having been on the tentative list for UNESCO world heritage sites since 1996, Bago was the capital of the Mon people. Throughout centuries, shifts of power in the region meant that the Mon was subjugated to other kingdoms. Its prosperous period occurred around 1369–1569, under the name “Hanthawaddy”, it was the capital of the independent Mon Kingdom. As well as its political magnitude, it possessed significant religious significance from the legend that Buddha traveled around South East Asia 8 years after his enlightenment and saw a pair of Hamsa birds on a small land where Bago now nestles.

Known as Natmataung, Natma Taung National Park sits in Chin State in western Myanmar. The park covers 72,300 hectares of the Chin Hills and contains Mt. Natma Taung, which rises more than 2,000 meters above the surrounding landscape to a height of over 3,000 meters. The park was erected in 1994 primarily to protect the upper watersheds of the Lemro and Myittha Rivers.

Mangrove forests, beach and dune forests, and seagrass beds add to the faunal and floral diversity. The MA contains one protected area: Lampi Island Marine National Park (LIMNP), which was designated in 1996 and is an ASEAN Heritage Park. MA consist of two shark protected areas and three small crab protected areas. There are about 1,000 indigenous nomadic Moken inhabiting here.

Having been on the tentative list for UNESCO world heritage sites since 2014, the Myeik Archipelago encompasses around 800 islands of primarily limestone and granite situated along 60 km off Myanmar’s southern coast. These islands are covered by lowland wet evergreen forest and surrounded by an extensive coral reef system.

Being one of the largest remaining areas, Taninthary Forest Corridor is located in the Taninthary Range that straddles the southern Thai-Myanmar border and contains a multitude of globally threatened species. The TFC lies within the northern section of the Indochinese-Sundaic zoological transition zone, which divides Indo-Chinese flora and fauna from Sundaic species. The corridor contains some of the southernmost dry seasonal evergreen forests before they transition to aseasonal wet evergreen forest further to the south. It provides habitat for several EN species including the Asian Elephant, Gurney’s Pitta, and Sunda Pangolin.

The Irrawaddy River Corridor (ARC) covers a 400 km stretch of one of the last major undammed rivers in Asia. Tributaries originating high in Myanmar’s northern mountains flow south before joining northeast of Myitkyina to form the Irrawaddy River. The river basin lies almost entirely within Myanmar and covers nearly 60% of its land surface.

Above the city of Mandalay until Bhamo, the river is home to the globally VU Irrawaddy Dolphin. The CR sub-population of Irrawaddy Dolphin in this river is famous for its cooperative fishing behavior with humans. The ARC provides habitat for these dolphins, as well as for other wildlife including the White-bellied Heron and several species of globally threatened turtle. In total, the corridor covers 400 km and would protect 90,000 hectares of river and riparian habitat.

Indawgyi Lake Wildlife Sanctuary (WS) contains Indawgyi Lake, the largest freshwater lake in Myanmar, and a substantial portion of the surrounding forested watershed. Established in 1999, ILWS covers 73,600 hectares and ranges in elevation from 169 m at the lake surface to over 1,400 m. The lake drains to the north and includes 12,000 hectares of open water, along with marsh, floating vegetation, and submerged macrophytes. 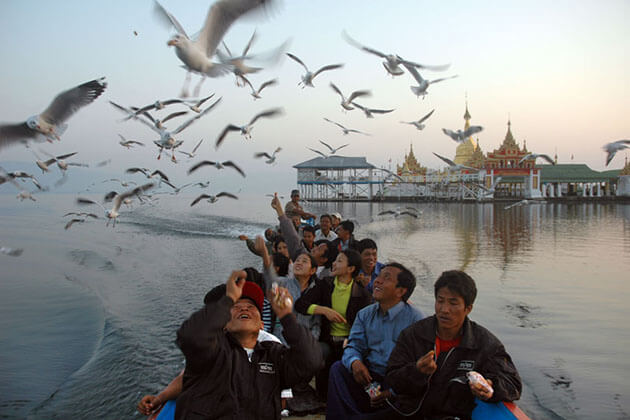 Rice is cultivated adjacent to the lake in some low-elevation areas, while mixed deciduous forest, riverine evergreen forest, and hill pine forest cover the uplands in the watershed. Half of ILWS is a forest; one-third is a non-rice wetland. Species in ILWS include globally threatened waterbirds and endemic fish and turtle species.

The Historic and Marine Landscape of the Banda islands

Having been on the tentative list since 2015, Banda islands, also known as Spice Islands, were the original and sole location of the production of the spices nutmeg and mace during the most prosperous years of Dutch, English and Portuguese colonization. The Banda Islands sit in the east section of the Indo-Malayan archipelago.

They are characterized by eleven small volcanic islands, called Neira, Gunung Api, Banda Besar, Rhun, Ai, Hatta, Syahrir, Karaka, Manukan, Nailaka and Batu Kapal, with a total area of 8,150 hectares. These islands encompass the nutmeg plantations for spice production, some forts for the defense of the spices, and a colonial town for trading and administration.