Burma has a huge potential for economic development. The Myanmar has a huge area of agricultural land. This advantage can lead Myanmar to become one of the biggest agricultural countries in Southeast Asia in the future with irrigation investment. The current agricultural land used was slightly higher than Vietnamese rice south a bit, but rice output is only a half of Vietnam, because less than 30% of productivity. Forest resources are abundant but untapped because of the civil war. According to estimation, Myanmar has gas reserves can be exploited as 7.8 billion cubic feet (1.4 billion barrels). There is also unexplored petroleum. Burma is currently producing 90% of jade in the world and leader in the production of rubies and sapphires. 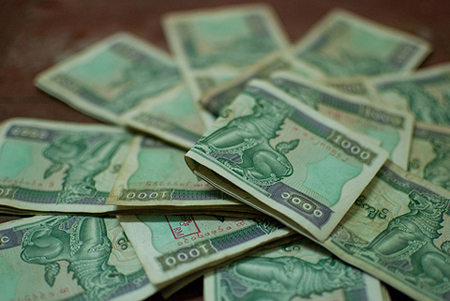 GDP in 2012 was 1013 USD (according to the principles of the UN). Since rewrote the Constitution in 2008 to reform politics and economies, Myanmar economy became more stable and prospered. Inflation reduced from 22% in 2008 to 4-5% and 1.5% in 2012. The value of Kyat was higher, from 1$ = 1057 in 2009 to 820 in 2012. However, in 2013, due to balance of payments deficits USD back up at 970 kyat. GDP from 2004-2008 increased about 4.5% but then increased and reached over 7% in 2012.
It could be confirmed that before economic reform with the new Constitution of 2008, Burma was not dependent on the Chinese economy. Before 2008, China’s total investment in Myanmar only is $ 1 billion. This investment soared to $ 13 billion in 2011 by two major investment is oil and gas pipelines from the Bay of Bengal to Kunming (Yunnan) and Nanning (Guangxi) (2). So far, China’s total investment in Myanmar up to $ 14 billion, and only 35% of total foreign investment in Myanmar. The second largest investor is Thailand ($ 10 billion) and the third is Hong Kong ($ 6.4 billion). Thailand is buying 75% of Burma gas but in the future may differ because of Chinese demand. China’s investment in Myanmar is in trouble. Western policies go near the Burmese took the decision in 2010 to suspend Myitsone hydropower project until the end of the term of President Thein Sein.

This project has a great impact on the environment and requires large relocated population, but only purpose to supply electricity to China. In 2013, China’s investment in Monywa copper mines was in trouble because of the opposition of the local population because of a dispute about compensation. More recently, in 2103, China had to withdraw in the bidding race on the cell phone as reluctant attitude of the Burmese government. Rail project from Kunming (China) to Bengal Bay ports as shelved (3).