Myanmar customs on wedding and funeral ceremonies are somehow similar to other countries in Asia with some complicated and typical rituals during the ceremony. Once taking a Myanmar tour, experience the Burmese tradition on the wedding and dead ceremony will give you a different perspective about the country and its people. In this article, we bring you a closer look into the Golden Land of Myanmar.

Wedding in Myanmar is formalization. Two families have to choose an official or business suit (successful, happy, have enough sons and daughters in their family) wrapped fragrant coronal on the neck of bride and groom at the wedding for good luck and wear wedding rings for being faithful to each other forever. After that, the person who presides over the wedding ceremony read biographies of the bride and the groom.

Depending on the economic conditions that the wedding party is organized big or small but traditional music is very important, it cannot miss the wedding of Myanmar people. Guests are invited to attend mostly send gifts in kind, some send a few gifts in cash. Wedding gifts are displayed at a central location of the wedding to make the wedding become more elegant and memorable. If the guests give money, they have to give it in multiples of 100.

The constitution of Myanmar issued a monogamous marriage. The State does not limit the number of children in each family. The proportion of marriages in Myanmar is the lowest in Southeast Asia. Burmese women have equal rights as men in society (except some religions and beliefs) and they are often treated with “priority” of the property when the couple divorced.

Traditional dress for the bride consists of two-piece dresses: the longyi for skirt and anngyi for the blouse. Covering outside is the gown, it is always made by silk materials and decorated with beads, pearls, and sequins. Burmese bride doesn’t wear a veil but she wears a shawl that made by hand with rhinestones, crystal beads, sequins, and pearls. The traditional wedding dress often made with some popular colors such as white, lavender, yellow, blue, and rose pink. Specifically, both the bride and groom choose rose pink color cause it represents the color of the lotus that symbolizes the purity of spirit.

Like Vietnam, Burmese people also use betel leaves and areca nuts for the offering at the wedding. Normally, on the betrothal ceremony, the bridegroom’s family will prepare betel, areca with a sum of money depends on their level of wealth. The bride’s family, likewise, prepare money and gold as a gift for the couple.

Up to 95% of the population in Myanmar practices Buddhism. Likewise, the wedding is an occasion for Burmese people to express their sincere respect to the Buddha. For a long time, this has been a symbol of Myanmar lifestyle and cultural beauty. On the early morning of the big day, the groom’s family gets up early to transfer to the bride’s family for the procession and then transfer to the pagoda or monastery to pray for good luck and do charity. After the ritual in the pagoda is the ancestral ceremony at the groom’s family. Traditionally, Burmese people often invite the monk to bless the young couple. 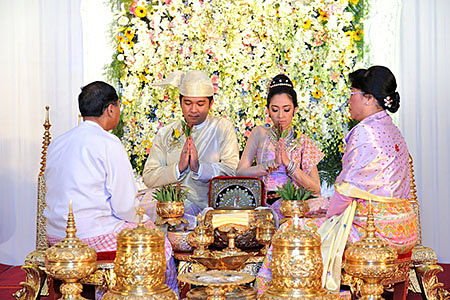 The Preparation of Funeral Ceremony in Myanmar

Normally, before the funeral, neighbors and acquaintances would have been informed by the declining health situation of the deceased. After receiving the news of the death, those people will depend on their connections to chose to send their representative, a condolence letter or pay homage personally. The deceased is bathed and dressed in his finest clothes then preserved in the low temperature before the funeral takes place. The relative then put a coin into the mouth of the deceased, it is considered a small change for him to pay a ferry toll in the underworld. This is also similar to the traditional custom in many Asia countries.

During the Funeral Ceremony in Myanmar

Myanmar’s funeral is celebrated simply and often lasts for seven days, homeowners invite monks to chant for the deceased soul getting liberation in the other world, and then cremated. Guests attend the funeral do not offer valuable things or money but the clothes and items for the monks, then the homeowner make offerings to the temple. Myanmar custom does not allow burying the dead but creating. Therefore, in Myanmar, there is almost no cemetery of Catholicism believers. There is also no Buddhist and Ancestor altar in Myanmar family.

After the Funeral Ceremony in Myanmar

Generally, after finishing the funeral ceremony, the family of the deceased will invite the attendees with a meal to express their gratitude to everyone who supports them during the ceremony and share their most difficult time. Likewise, the guests also give the family some money as a contribution to the funeral.