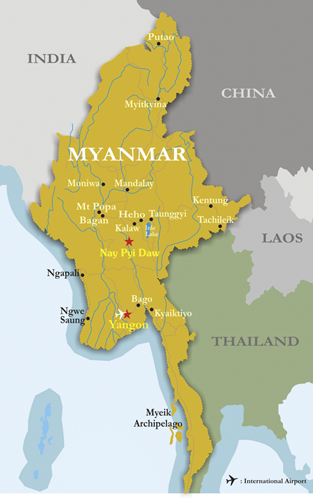 Each season has its own attraction. During the rainy season, the rains mainly in its Coastal areas and the Delta region, there are many clear and nice days and landscapes are lush green. During this period, central and northern Myanmar including Mandalay, Bagan and Inle Lake are relatively free of rain.

Mountains and Rivers
The highest mountain in Myanmar is Lisu also know as as Hkakabo Razi which is 5881 meter high above sea level, the second highest would be Gam long Razi which is 5835 m. The longest and most important rivers are the Irrawaddy with its tributaries: the Chindwin, Sittaung and Thanlwin.

People and Languages
Population: Up to now the population of Myanmar is more than 53 million (annual rate of 1.61% growth). The major ethnic groups are Bamar, Kachin, Kayah, Kayin, Chin, Mon, Rakhine and Shan. In the whole countries there are about more than 100 ethnic groups.

Languages:
The main and official language is Myanmar. Most of other ethnic group have own languages and dialects. As a colony of Britain in the past, English is widely spoken and understood.

Entry Visa Needs
A valid passport (at least 6 months) with an entry visa is required for all visitors to Myanmar.

Entry visas:
Tourists and business visas are valid for 28 days. You can extend your visa by extensions of 14 days or for a further period of 28 days. All visitors, including children over 7 years need a visa to enter the country.

Visa on Arrival:
This service could be granted on a pre-arranged at least 10 days in advance by Go Myanmar Tours

Passport information such as Full Name/passport number/nationality and occupation are required in advance. Two passport photos need at for your visa arrival in Yangon, Mandalay or Nay Pyi Taw

Customs Declaration
Currency, jewelry, electrical goods, and cameras must be declared at the airport. Gems and jewelry purchased from authorized dealers are allowed to be released. Antiquities (articles more than 40 years) are not allowed to be taken outside the country.

Health Concern
No vaccinations are officially required for a visit to Myanmar. Malaria prophylaxis is strongly recommended. Vaccinations against Polio, Tetanus, and Hepatitis also recommended.

Food and drink
Myanmar food is influenced by the cuisine of Thailand and China is neighboring Indian recipes in the menu. You should drink only bottled water. It is not recommended to eat the raw vegetable.

By train:
Most Railway Myanmar is open to foreign tourist’s destinations such as Yangon – Mandalay Express train travel is the most popular. The train in Myanmar is basic and sometimes not clean. Please make sure that you bring enough warm clothes as at night it could be quite cold on the train.

Post and Telecommunications
The Central Post Office located at the corner of Bo Aung Kyaw Street-ins and Strand Road in Yangon. Works 09: 30 to 4:30 p.m. This offer international calls, telex and fax nearly visiting the major sites.

Office Hours in Myanmar
Government office and Business hours: 9:30 to 16:30. Monday to Saturday.

Dress
Cotton clothing and a light jacket for the evenings during the cool season are recommended. Please tranh be wearing shorts, tank tops or sleeveless shirts KHI visit temples and pagodas. Footwear is strictly prohibited in pagodas and monasteries. Whenever dress modestly.

Shopping
Best buys in Myanmar include lacquer, silver, wood and stone carvings, silks and hand-woven cotton, gemstones, traditional crafts, and puppets. All gems and jewelry purchases made by authorized government dealers who must issue an official receipt, required for export of items

Local currency
Myanmar currency is known as the “kyat” (pronounced Chatt). At the time of writing the exchange rate for Kyat to the USA is 1 USD = 1,020 Kyat. Some major hotels and some restaurants (very few) accept major credit cards Visa or Master. The easiest way is to pay in cash in USD or Kyatt

Business / Social Councils
An appointment should be made in advance and punctuality is appreciated in Myanmar. For business meetings, men wear a lightweight suit and tie. Women should wear modest clothing.
In Myanmar, it is customary to shake hands on first meeting and leave. Business cards are exchanged after the introduction. Many government officials speak good English. Visitors should be receptive to local customs and conventions.
In social occasions, an invitation to a restaurant should not be punctual and dress as for business meetings.

Restricted areas
Mogoke (Ruby mine) in the land
Hpakant (jade mines) in the Kachin State
Chin state (except Special Travel Permit Mt Victoria)
Kayah State (Loikaw, the birthplace of the Padaung tribe)
Except for the Loikaw the other places can be visited under a special permit which considered case by case basis.

The semi-restricted areas
International and foreign tourists entering through checkpoints on the border with a valid visa are allowed to make in the areas listed below that:

Northern Shan State
1. Tours package arranged with valid visas by Authorized Tour Operators are allowed to enter through Muse, Namkham Lone Kun Kyu Koke and checkpoints and Mandalay and Yangon, then take Lashio or by air, road or rail
2. Tour with valid visas up by Authorized Tour Companies is allowed to enter the checkpoint and process to Mandalay and Yangon via Bamaw either by air or water.

Traveling in Myanmar
The fastest and most comfortable way to travel in a Myanmar tour package is by air. Some popular airlines would be Air Mandalay, Air Bagan, Air KBZ, Yangon Airways, and Wings Asia. Railways, ferries, and coaches also are used for tours offer by Go Myanmar Tours. The car, van, and coaches used are later models, fully air-conditioned vehicles. You should bring your Passport when traveling outside of Yangon.

The quickest and most comfortable way of domestic travel is by Air Mandalay, Air Bagan, Air KBZ, Asia Wings and Yangon Airways, the private domestic air carriers. Railways, ferry-boats, and coaches may also be utilized for some Go Myanmar Tours. The car and coaches used are later models, fully air-conditioned vehicles. Passport should be carried when traveling outside of Yangon.