The Myanmar (Burma) form of greeting is not confined to any part of the day such that you say, “Good morning” in the morning and, “Good night” at night. Nor is it attached to a gesture like the Thai-wai. It originates in a feeling of concern for the other person and a wish for that person’s well being.

Myanmar culture has a close-knit relation with Buddhism and so much of the accepted etiquette pertains to Buddhist beliefs. In order to greet the monks, you should place your hands together in a prayer position and hold them at face level and bow deeply. When talking to a monk, you can bow slightly or sit down to have your body lower than his. In Myanmar, women should not touch a monk or give objects directly to him. When traveling by buses and trains, people customarily give up their seats to monks. 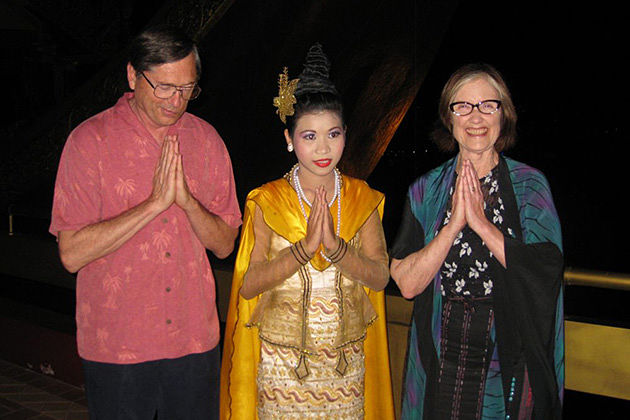 Some people taking their first  Myanmar trips might find this form of greeting too personal are creating another form of words which is more general and detached and evokes the notion of blessedness. Others wishing to execute a greeting more concrete and physical are using the Myanmar gesture similar to the Thai wai.

Basic Language for Greetings In Myanmar

This is a common Myanmar greeting. It asks, “Are you well?” The “well” in this case is not limited to an inquiry after the person’s health. It asks about the total wellbeing of the person as a compound of the physical, mental, economic and social conditions. It has its source in the basic Myanmar emotion which is generated in personal relations, and which covers all living things: loving-kindness.

nei kaun: thala: is used by people of equal age or status or to a lower level., A younger or junior person greeting an older or superior substitute the respectful form ba for tha nei kaun: ba la

When you meet a friend in the street, going or coming, you may use the more familiar, be le: Or if you pass your neighbor sitting on the stoop, she will greet you with be le: “Where are you going”. Or if you are moving in the direction of your home from somewhere, she will ask, be ga. la thale: “Where have you come from?” This is not being inquisitive. It is an expression of fellow-feeling, a feeling of community and family.

The same feeling urges a person to use the greeting, sa pi bi la: “Have you eaten?” This is asked at lunch or supper time. And if you happen to pass someone who is eating at home or in a food shop, you will receive the invitation, sa: ba oun: “Please eat.”

nei kaun thala: is adequate for interpersonal greetings. But when a person is addressing a large gathering, such as a theatre audience, it is felt that there is a need for a less personal greeting. Thus, the greeting min gala ba. (Auspiciousness). This form is regularly used in schools. When the teacher enters the classroom, the children rise and say min gala ba hsaya ma… The teacher replies, min gala ba. 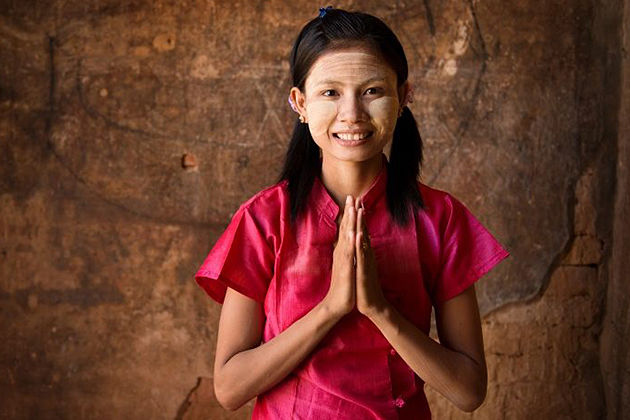 It has also become a convenient form to offer to foreign visitors who ask for the Myanmar greeting. So you hear foreign visitors say min gala ba while Myanmar between themselves use nei kaun: ba la:
Sometimes the min gala ba is accompanied by the palms and fingers brought together at chin level.
To raise them to the forehead level is to perform the act of gadaw.

Gadaw is the name of the act of paying obeisance to Buddha, Dhamma, and Sanghai(Order of monks) and one’s elders. It is done sitting on the floor with feet tucked in beneath you. It is the starting posture of the bow where the palms end up flat together with the forehead touching the floor.
When you meet a monk or an elder in passing and there is no time or occasion for a full act of obeisance, the gadaw is done with clasped palms and fingers at forehead level.

Gadaw is also the expression sometimes used to seek pardon. For instance, when in a crowded prayer pavilion you cross in front of a sitting or praying person, you bend slightly and say, gadaw. In thus seek- ing pardon you say the name of the act as a substitute for the act. You also say gadaw. When you have to touch an older or superior person such as when flicking an insect or a piece of dirt off his shirt or jacket.
Remember gadaw is the polite expression to seek pardon of an older or superior person or in a situation which calls for respect, gadaw is also the name of the act of obeisance.

Useful Phrases for Greetings in Myanmar