April is the hottest month of the year in Mandalay with burning and arid climate. During this month, the average temperature is relatively high at 31 °C (88°F).
The average daylight can last for 12 – 13 hours with 10 hours of sunlight per day. As a result, the afternoon in Mandalay can be severely hot and the temperature can reach 38 °C (101°F).
As it is intensely hot during the day, the maximum UV levels will be extreme at mid-day when the sky is clear. When the night falls, the weather remains relatively warm at 24°C (75°F)
Mandalay weather in April is dry with infrequent rain. The estimated rainfall is just 38mm in 3 days during the whole month. 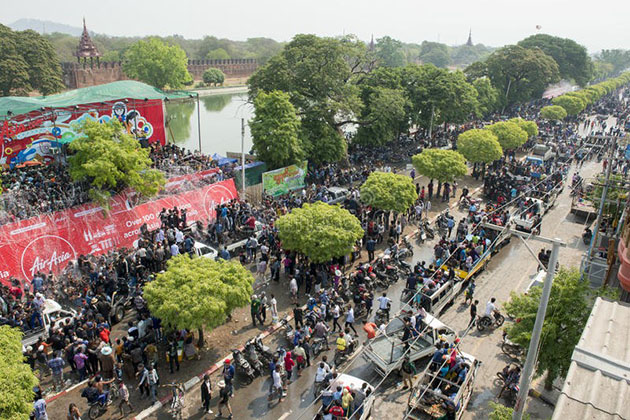 Clothing Tips for Traveling to Mandalay in April

If you travel to Mandalay in April, just note to prepare everything to against the sun. It is sunny during the day, especially in the afternoon, it is burning hot. Therefore, avoid to go out from 1 pm to 3 pm. While taking a city tour, a long-sleeve T-shirt and sunglasses are necessary to protect you from sunburn.

The highlight of Mandalay Tour in April

April enjoys an important event of Burmese people toward the whole country. This time marks the end of the harvest season and people start celebrating the lively Thingyan Water Festival. The festival takes place in the middle of April and lasts for 3 days. During these days, people pour out the street and throw water to each other, as the people believe that the water will purify the sin and cleanse out the evil.
Traveling to Mandalay in April, you will witness a lot of water stations and people line up to wait for the passers-by come to pick them up. You will expect to soak into the water thrown out from pots, buckets, and hoses.
During the festival, bands and DJs blare out music. Special Thingyan songs are played all the time. Stroll through the street, you can also have a chance to witness traditional dance performances.
Tips: If you attend the water festival, remember to put your phone and belongings into waterproof bags as you will get wet.