The development of Myanmar folk dances has kept in line with folk music and songs. Therefore, they are always associated with folk music and songs. These three performing arts are complementary and agro-based. Due to the fact that the vast minority of the population in Myanmar is peasants, their performances mirror the agricultural culture and their daily activities. While their traditional music and songs depict their daily lifestyle, their traditional dances present their production activities. Mostly all Myanmar folk dances are performed by a group of people on occasions of some special events. If you are an art lover and planning for a Myanmar tour to enjoy the exceptional art of Burma, do not miss this article to have an insight into Myanmar folk dance. Some samples of most pervasive and common dances will be given as follow.

The History of Myanmar Folk Dance

The history of Myanmar folk dance dates back to the pre-Buddhism time together with the deity worship that characterized by the complicated traditional dance required the dancer to perform intricated gestures. As a result, it was said to be somehow similar to the circus performance. Nowadays, it has been preserved and developed by both skillful and young dancers.

This kind of traditional art is performed by the ou: zi drum players, who are accompanied by an orchestra usually composed of at least 4 instrumentalists. These 4 instruments include drum, oboe, cymbals, and bamboo clapper player. The ou:zi dancer plays the ou:zi drum, dances and sings at the same time. When he is tired, the cymbals player or bamboo clapper player will take over him. Ou-zi dance steps are quick and movements are jerky. Solo and chorus singing alternate. The ou-zi dance is usually performed in some important occasions like the local and the pagoda festival due to its lyrics. What makes ou-zi dance outstanding from other kinds of dance is the chanting of “Thangja” (thangyat), an antiphonal chant usually amusing or satirical sung to the accompaniment of ou:zi. Because the ou-zi could add boisterous and pastoral atmosphere to the festivals, it is performed on all happy and joyous occasions.

Like other folk dances, Dou-ba dance is also associated with the same band of musicians. What makes ou-zi different from dou-ba is the type of drum performed by the dancers. While Dou-ba is a two-dimensional drum which is slung by a strap on the neck of the player, Ou:zi, normally slung on the shoulder of the player is an elongated one-sided drum with a long body and open-ended tail or leg. Tha-gja is also chanted in dou-ba dance. Sometimes than-gja is composed extempore by a witty rhymester of the village. Boisterous percussion music, sonorous songs, agile dance steps and chanting of amusing tha-gja make the dou-ba waing one of the most hilarious folk dances. It can be performed both at special events like novitiation ceremony. Due to the fact that the dou-ba dance can agitate and inspire the public, this traditional dance is normally played when people join their hands to do voluntary work such as digging water wells and tanks, building roads, upgrading public and religious structures.

The Bjo dance usually takes place after the conclusion of a religious deed especially alms-giving, donation, novation or ordination ceremonies is released. As bjo music is monotone and constant, normally it is not accompanied by dance. However, in some areas, bjo beat is drawn into the dance as some adults and even the elder, particularly the donors because they are overwhelmed with rapture and joy over their deed of religious merit. The development of bjo dance is an evitable consequence of these important performances. 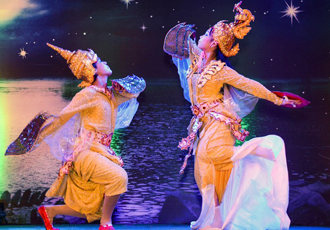 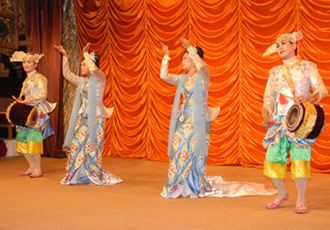 The Boun Gyi dance has its present in Upper Myanmar. The origin of this fork dance could date back from the dawn of the Kon-baung dynasty (A.D. 1752-1885) originated in Shwebo. While the organizer of Boun-gyi is the owner of paddy land, the participants normally are the cultivators. Planting and harvesting times are when this traditional dance is played. Both Boun-gyi dance, the music and the accompanied song accompanying are slow. However, the blend of the clash of big brass cymbals and the boom of the drum beat makes the sounds of the boun-gyi reverberating.

Another folk dance Naban Zan Dance, is also common Myanmar and favored by the local people. People named this dance after the trendy hairstyle favored by youngsters in the ancient time. Tufts of hair are tied on either side of the head to hang over the ear. The dancer is a boy of the early teen with a naban zan hairstyle, circular paint of thanakha make-up on his cheeks. Due to the cloth as accessories like a round of “gold” pendant, “gold” bangles and anklets, the performer looks like a young boy of the immemorial time. With the accompaniment of an orchestra composed of five to seven instrumentalists, he dances and prances boyishly to the percussion music. This dance is played on festive occasions, particularly for the fundraising for social welfare and religious works.

Some scholars opine the emergence of that this folk dance could be traced back from the beginning of British colonial rule. The performer of this comic dance is a man who dresses like a typical old Myanmar gentleman with a long neatly trimmed mustache, a scarf around his neck, a spotted turban or headgear, a square patterned sarong around his waist. He uses one hand to hold a lady’s open parasol in one hand, while the other will move with dance gestures. He also makes comic faces. On the accompaniment, the music he shakes his mustache moves his head, eyeballs, and eyebrows at the same time. Despite his formal dress, his actions present as if he is looking for a beautiful young girl. The audience burst into laughter while seeing his comics and antics. On some occasions, there will be the presence of another comic character who is introduced in a supporting role. It is a female dancer with the role name of Daw Moe. Daw Moe is characterized as a middle-aged spinster who is on a lookout of a good husband. She dresses herself up and acts like a young lady and dances flirtingly with U Shway Yoe who does not like spinsters always chase beautiful young girls. It is believed that the U Shway Yoe dance satirizes some Myanmar of the old upper class who becomes social misfits due to their idiosyncrasies and eccentricities. The dance aptly pokes fun at both the aging male philanderer and fastidious spinster. The reasons given above explain why this fork dance is so common in both the countryside and town. The name Shway Yoe caught on in the art and commercial worlds.
These samples of traditional dance are what Myanmar could crown on, and they are time-considered honored tangible aspects of Myanmar culture. And persistently contribute to remain as part and parcel of Myanmar folk culture.

Along with the development of the society, Myanmar folk dance has become one of the most important traditional dances in Myanmar and an integral part of the daily life of the Burmese people making it among the main tourist attractions of Myanmar. Although they have changed significantly over the past countries, they are still co-existent with the locals. Throughout the centuries, it has been kept by generation to generation expressing authentic Burmese cultural identity. The intricated dances not only show the skill of people but also reflect the beauty of Buddhism into people spirit. Step aside from the adult, Burmese teenager is taught to perform the traditional folk dance. Although the trend of integration and globalization has many influences on every field of humankind including culture, Myanmar, with its deep-rooted in tradition, culture, and history has their national cultural heritage that serves as a bulwark against the undesirable effects of globalization. In the journey of exploring Myanmar culture and tradition, there is not more eye-opening than a chance to witness the fantastic performance of Burmese dancers to see authentic Myanmar. Be prepared, your heart is going to racing!