Located in Ywama village, Inle Lake, Phaung Daw Oo Pagoda is one of the famous tourist attractions in Myanmar well-known for its large and impressive festival. Many influxes of tourists flock to the pagoda to marvel at the activity which Buddha Images are carried on a royal barge and across 14 villages in the lake.

Phaungdawoo Pagoda is believed to be built in the King Alaungsithu’s dynasty which lasted from A.D 1112-1167.
According to the legend, the King Alaungsithu often had journeyed across rivers in the country. His royal barge was made of the wood containing a philosopher’s stone, so it had supernatural power. On the trip to Inle Lake, the royal barge stopped at a place where the pagoda was built. 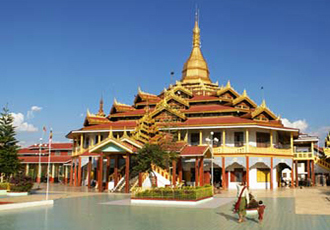 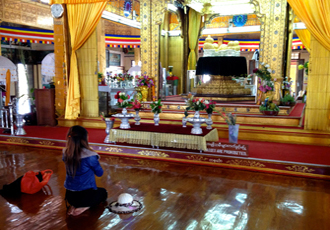 The special feature of the pagoda is five golden Buddha images in a wide range of sizes from 9-18 inches tall. Because all images are covered with many solid gold leaves, they are fairly heavy.
The pagoda owns a huge monastery opened to all pilgrims. However, only men are allowed to place gold leaf on the images. Pilgrims often place small robe around the images, take the robe back to their houses; put it on the altar as a token of respect for the Buddha.

Open daily: daylight time
The best time to take an Inle Lake tour package is between September and March of every year.

From the middle of September to October, the festival of Phaung Daw Oo Pagoda which is the biggest festival in Inle Lake is held. During the festival, there are a number of exciting activities including boat race and tour of Buddha’s images around 14 villages.

Four of the five Buddha images are placed on a colorful royal barge accompanied by many other boats and towed by leg-rowers around the lake. People from villages in Inle Lake will come and pay homage to images.
In addition, visitors also can gain a first-hand experience of boat race participated by leg-rowers. This is the unique scene tourists just can see in Inle Lake.