Located near the 14th Street, Mandalay, also close to Atumashi monastery; the Shwenandaw Monastery is one of the wonderfully fragile yet grand 19th-century wooden monastery building in the country since because it used to be part of the Mandalay Royal Palace and was completely gilded.

The unique feature of this site is that both external and internal sides of the monastery are adorned with intricate wood carvings.

History of the Shwenandaw Monastery

Journey back to history, the Shwenandaw Monastery was once utilized for one part of the Royal Palace in Amarapura. The movement of the capital city to Mandalay makes the building dismantled. In 1987, the site was transported to Mandalay and reconstructed there as part of the new all teak Royal Palace in 1857. King Mindon used the building as his personal living quarters. After the death of the King, his son had the building relocated to its current place outside of the Palace grounds, where it was transformed to a monastery in 1880.

It is widely accepted that the Golden Palace Monastery is an ideal place to get an in-depth knowledge of what the traditional Royal Palace must have looked like. Due to the fact that the Palace was diminished by fire during World War 2, the Shwenandaw Monastery is the only chef remained traditional teak wooden building of the original Mandalay Royal Palace.

The large structure of Shwenandaw Pagoda built in typical Burmese architectural style features a four-tiered roof that consists of some parts, each section gets smaller from the top level to the bottom level. The roof lines are adorned with very detailed intricate wood carvings. The roofs bargeboards boast carved demonstrations of mythical creatures, animals, dancers, and flowers.
An intricately carved teak verandah at the first level surrounds the monastery. Some of the carved wooden panels ravaged by time and weather have been replaced with new panels, especially on the outside.
The duration of the roof is largely supported by teak pillars inside the building. There is still some gold plating inside the monastery once the structure was completely gilded and decorated with glass mosaics. 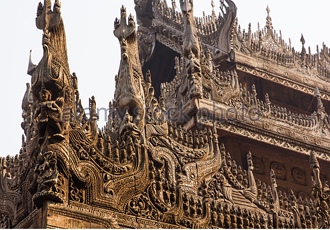 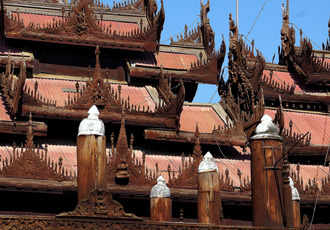 Inside the building lie several well-preserved panels which shelters weather and sunlight. Of all these shelters, there are a number of carved panels depicting scenes from the Jataka tales, the tales about the previous lives of the Buddha.
The main Buddha image is mounted inside the main room in the center of the building, with Nat spirits worshipping it. Women are excluded from going inside to worship the image.

How to get to the Shwenandaw Monastery

Due to its prime location just a few hundred meters from the North East section of the Royal Palace grounds, next to the Atumashi pagoda, tourists from Mandalay tours could reach Shwenandaw Monastery through a comfortable rickshaw from downtown Mandalay.

Opening hours: daily from 8 am to 8 pm.
Tickets: Buy a Mandalay archaeological zone ticket with the price of US $10 that is valid for a week. This ticket is also useable for the Atumashi Pagoda situated right next to it and for a number of attractions around Mandalay in the towns of Sagaing, Innwa, and Amarapura.