Whenever you visiting Bagan from a Myanmar trip, Tharabar Gate is the very first place welcome you to the great city of Bagan. Tharabar Gate is the main gateway to the ancient Bagan city. It is the eastern gate of the old wall. Tharabar Gate is the only site of the old city constructed by King Pyinbya that has survived under the test of time. The construction of this structure emerged in 849 A.D during the 9th century. The western and northern part of the city wall was washed away by the river. Originally, Tharabar gate featured 12 gates during that time. The origin of Tharabar is derived from the Pali term “Sarabhanga” meaning “shielded against arrows”. Despite the fact that most of this structure was spoiled, stucco carvings of the ogres can still be found. 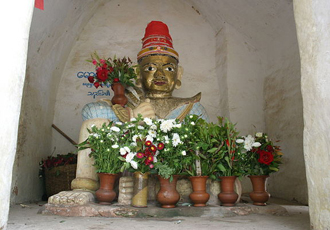 It is believed that spiritual beings are the guardians of the gate. While on the left side of the gate is the brother “Lord of the Great Mountain”, on the right side is the sister “Golden face”