Despite not being an impressive monument in Bagan, the Bu pagoda can be still an interesting destination to visit in Bagan day tours. It is renowned for its age and its prime location on the banks of the Irrawaddy River. This gilded pagoda is deeply imprinted by Pyu style, a descendant from the Indian style stupa.
Although the age of this pagoda is clouded in mystery, many people believe that the history of this monument could be traced back to the year 300. Judging from the style of the pagoda, it seems likely that it dates from the 9th century, when the city of Bagan was founded or the 11th century when the city walls were built. It is a cylindrical shaped Pyu-style pagoda and is said to be the oldest among many temples in Bagan.

This stunning structure was ruined by the earthquake in 1975, and the construction of this pagoda was totally rebuilt. The distinctively shaped bulbous stupa stands above rows of crenelated terraces. The view from the river is also a breath-taking one.
The legend of the Bupaya Pagoda
In regard to the legend of the Bupaya pagoda, this site is believed to be built by King Pyusawhti, who ruled Bagan during the end of the 3rd century. Legend has it that before becoming the King, Pyusawhti strived to free the Bagan Kingdom of five nuisances, one of which was the infestation of the Irrawaddy river banks by the bu, a kind of gourd plant. When he became the ruler, he had the pagoda constructed at the location of the bu being get rid of. Buddhist relics were enshrined in the pagoda. With bu meaning gourd and Phaya meaning pagoda, Bupaya Pahto literally means pagoda shaped like a gourd. The structure is in the shape of a bulbous dome and somewhat resembles the fruit of a gourd plant. 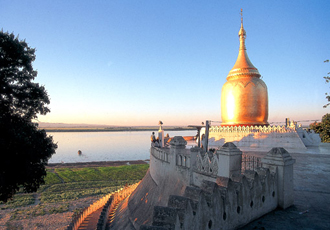 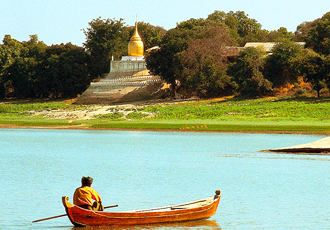 The cylindrical stupa is mounted on top of a number of terraces. Looking from the river, this structure looks like a fortress. Like other temples in Myanmar, the top of the temple is gilded hti, a finial shaped like an umbrella.
Reconstruction after the 1975 earthquake
After being broken up by the earthquake in 1975, the structure tumbled into the river. The current structure is a reconstruction of the original. If the original was made up of brick, the new one is a gilded building and made of concrete.
The temple grounds entrance is guarded by two white and gold Chinthes, Burmese mythological lions. On the grounds are also a number of very ornate pavilions.

Apart from visiting the pagoda, tourists could have chances to buy a number of items as the vibrant area around the temple features a number of market stalls, ox carts, and taxis. What’s more, boats on the river banks are available for you to charter for a cruise along the Irrawaddy river.

Travel Tips
Hiring a boat and taking an Irrawaddy river cruise are highly recommended to absorb a better view of the pagoda.