Located on the south of Myanmar, the city of Mawlamyine is the 4th largest city of Myanmar.

Mawlamyine sits next to Kyaikhtiyo City, this is the 4th largest city of Myanmar. Previously, this city was the capital of the Mon Kingdom. And seaports Moulmein is known as the most crowded and vibrant place of the city. So far, the city is quiet and peaceful, with lots of green trees that make the city become green and cool with some infrastructure of British colonial’s architecture. Off all the tourist attractions in Mawlamyine, a place should not be missed once visiting Mawlamyine in Myanmar tours is the mosque located on the bank of Thanlwin River. The mosque was built by Indian slaves who were brought to this area mining by British colonial from decades ago. There are also a few works of the first church beside the river was still kept until now.

There are significant famous places in the town of Mawlamyine. Out of the town, near the cliff is a series of Buddhist temples and monasteries. The most wonderful architecture in the mountain is gold Kyaikthanlan Paya Pagoda, built in the 9th century AD. This is also the temple bring inspiration to the English poet like Rudyard Kipling with two famous works is “Mandalay” and “By the old Moulmein Pagoda, lookin’ lazy at the sea”. The temple located in a unique position next to the Salween River runs into the Bay of Martaban. This is an ideal place to enjoy the sunset and catch the breeze blowing from the river.
If you take a boat trip to the end of the Salween River, you will catch the island Gaungse Kyun (Shampoo Island). Hundreds of years ago, under the reign of Ava, the majority of the royal family had a very special ritual called “shampoo”, therefore, every year, the members of the royal family used the water from the spring on the island to perform the ritual. The island is also the Buddhist center of the Mon Kingdom, represented by ancient temple Sandawshin. The Mawlamyine Zeigyo Commercial Center and Mon Cultural Museum are other highlights in the city. 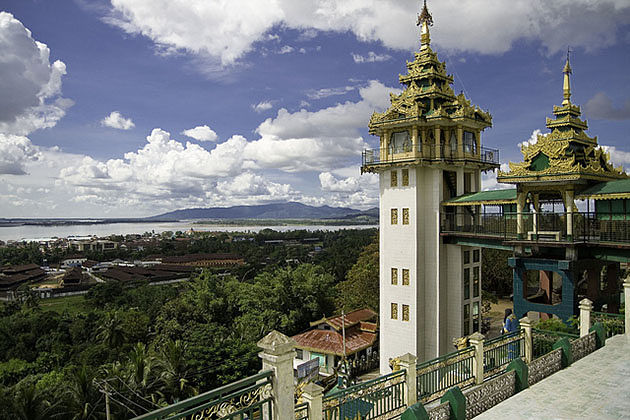 From the city of Mawlamyine along the south, visitors can catch a vivid picture of nature with mountains, lush green trees, and cool streams. Taking 30 minutes out of town, tourist can see two stunning limestone caves is located on the main road. Kyauktalon Taung pagoda is one of the most charming places situated on the slopes of the nearby hills. It takes some minutes to reach the pagoda. Another destination is a Hindu temple, where the travelers can admire hundreds of monkeys roam freely around the temple. Around 100 meters to the south, you will come to the land of Win Sein Taw Ya, it is keeping a 170-meter long reclining Buddha, and it is considered the largest Buddha statue in the world. 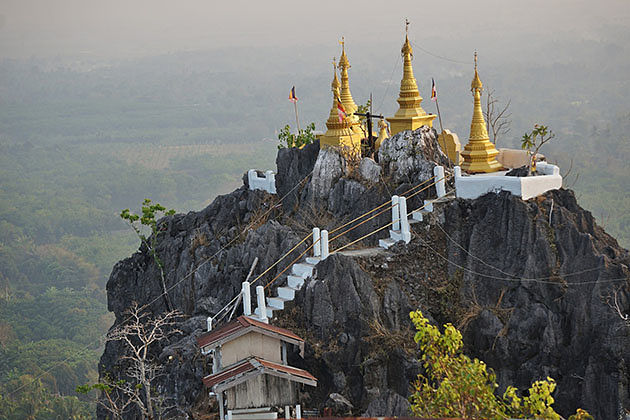 Mudon town in Thanbyuzayat located in the west of Death Railway built by fascist Japan, Thailand, and Burma during World War II with 415 km length of the railway line. Tens of thousands of prisoners died to build this railroad, including prisons, come from Australia, Netherlands, USA, UK, and all the workers from Myanmar, Thailand, and Malaysia. A cemetery called Thanbyuzayat War Cemetery which was built to commemorate 3771 died prisoners and the cemetery is under the management of Commonwealth War Graves Commission. One other monument built at the end of the railway line in the city.

Like other parts of Myanmar, Mawlamyine weather is warm all year round. The best time for a Mawlamyine tour is in the cold and dry season that lasts from November to February when the weather is quite comfortable and dry with the average temperature from 24-33 ˚C. April is the hottest month in the year with the maximum temperature can reach 35 ˚C. During the wet season from May to September, Mawlamyine receives a huge of rainfall. Nevertheless, the weather is always cooler after the rain and thus visitors can always travel to Mawlamyine this time. 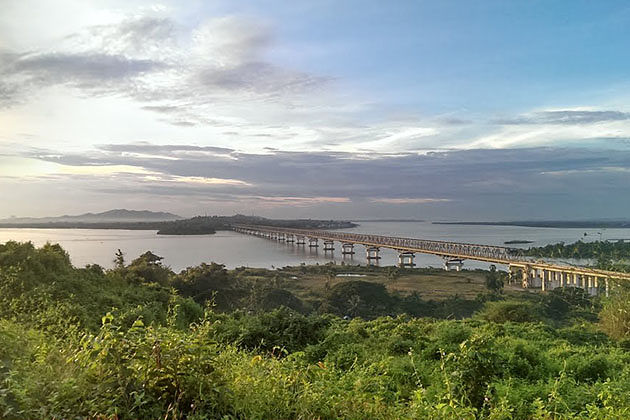 Together with scenic scenery, Mawlamyine food is another highlight that you should try on a Mawlamyine tour. It is not hyperbole if considering Mawlamyine is a paradise of Burmese food. Additionally, you are completely able to find Asian and Western cuisine in some restaurants in the region as well. Below is the list of the best restaurant in Mawlamyine.
Cinderella restaurant
This restaurant has become popular for tourist traveling to Mawlamyine for its Burmese, Chinese & western cuisine. Step aside from the tasty food, it also attracts tourist with the lovely garden.
Address: Baho Road, Sitkei Quarter, Mawlamyine.
Pao Mon organic restaurant
We highlight you to visit this restaurant if you want to try the local cuisine of Mawlamyine. Pao Mon restaurant is a project of Mon woman organization. All the dishes are cooked 100% by the local using organic ingredient.
Address: Myaing Thar Yar Road.
Bone Gyi restaurant
This restaurant offers visitors with the local, Thai & Chinese cuisine.
Address: No 1-B strand road, Mawlamyine
My City Café
For visitors who love to try the diversity of food at a place, My City Café is a great choice. The restaurant serves customers with Italian, Japanese, and traditional Burmese cuisine at a reasonable price.
Address: MyoMa Jetty Road, Sitka Quarter, Mawlamyine.
Ola la Café & Bar
If you want to spend a night in Mawlamyine, you should not skip Ola la Café & Bar cause it offers an ideal atmosphere with food, drinks, and nice space to chat with friends.
Address: Strand Road next to the Ngwe Moe Hotel in Mawlamyine.