Inwa is situated at the confluence of the Ayeyarwady and Dokhtawadi (Myitnge) rivers in Upper Myanmar. It was founded after the subversion of Sagaing and Pinya by the Shans in 1364 and was the seat of a kingdom for nearly five hundred years. In 1841 it was finally abandoned in favor of Amarapura. Its classical name is Yatnapura, the City of Gems. Until modem times Myanmar is usually referred to as Inwa by the outside world. So far, it has become one of the most popular attractions to visit in Myanmar tours.

The History of Inwa

Thadominbya, after founding Inwa, led an expedition towards the south where the Mons had established themselves at Bago since the fall of Bagan. But he died on his way and was succeeded by Minkyiswa-sawke. The latter was a descendant of the king of Bagan and his succession to the throne was hailed with delight by Myanmar. He adopted his predecessor’s policy of re-conquering the whole of the Myanmar dominions and succeeded, in the course of a few years, in establishing the power of Inwa as far as Pyay. He then invaded Bago, the Mon country, but was repulsed, and the following years witnessed a long struggle between Myanmar and the Mons. The story of the fight between Minkhaung and his valiant son Minye-kyawswa on one side and Razadarit of Bago on the other became a popular theme on Myanmar stages. Minkhaung died in 1422 and in the following year Razadarit met his death from a wound received while hunting elephants. There was a lull in the struggle for supremacy.

In the meantime, Taunggo which had been allowed to remain partially independent was growing into an important kingdom, and its population was increasing due to the emigrants from Inwa during the supremacy of the Shan kings. In 1530 Tabinshweti succeeded to the throne of Taungoo. He was looked upon by Myanmar as a champion of their race. When Tabinshweti attacked Bago the Mon king fled to Pyay. As Pyay was then a vassal state to Inwa, Thohanbwa came down with a Shan army to the assistance of Pyay. The attack of Tabinshweti’s army was not successful, but it gave cause in the succeeding years to a series of invasions on Myanmar proper by Tabinshweti and his successor. Inwa fell in 1555 and a Myanmar prince was placed on the throne as a tributary of the Taunggo empire under Bayinnaung. It was not till 1636 that Inwa became, for the first time in its history, the capital of the Myanmar kingdom when King Thalun moved there from Taungoo. The power of Myanmar again declined after a century when the Mons rose once again with a success that was as stupendous as it was brief. The city of Inwa was taken and destroyed in 1752, and its king was carried away as captive to Bago. However, a few years later, Alaungpaya regained the lost territories and became the undisputed emperor of Myanmar. Thus the power of the Mons was broken forever. Alaungpaya set up Shwebo in the north as the seat of his kingdom. But Inwa again became the capital in the reign of his son Hsinbyushin and his successor Singu Min. When Bodawpaya came to the throne he founded Amarapura as his capital. But his successor Bagyidaw again moved to Inwa. It was almost destroyed by an earthquake in 1838 and was abandoned three years later by Shwebo Min in favor of Amarapura.

The city is bounded on the north by the Ayeyarwady, on the east by the Myitnge and on the south and west by a canal linking the two rivers. Unlike the conventional plans of most of the ancient cities in Myanmar, the brick fortifications do not take a quadrangular form. The zigzagged walls assume the outline figure of a stylized lion seated on its hinds, and the citadel is not centrally disposed but occupies the north-eastern sector of the outer enclosure. Improvements and reconstruction of the layout of the inner city were made three times, firstly by Nyaungyan Min in 1597, secondly by Hsinbyushin in 1763 and lastly by Bagyidaw in 1832. Now there are several villages within the city area and a large part of it is under cultivation. Jungle growth covers most of the ruins but the remains of the fort walls and the moat are still clearly visible.

Htilaingshin pagoda is an example of the pagoda dating back to the Bagan period, it built by Kyansittha. King Shwenankyawshin of the first Inwa dynasty is renowned to have built a magnificent wooden palace and the ceremonies attending its construction were recorded in an inscription, now badly damaged but preserved in a masonry shed near the Htilaingshin pagoda. The solitary building which remains of Bagyidaw’s palace is the Nanmyin, a ninety-foot-high masonry watchtower. The earthquake of 1838 shook its foundations and toppled the upper portion, while the lower part is left leaning to one side. 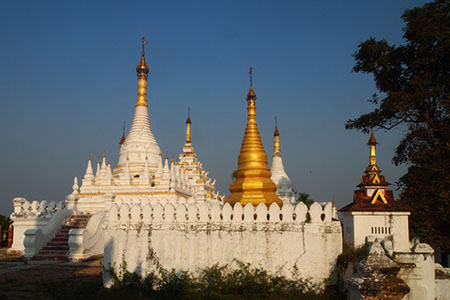 Maha Aungmye Bonzan Monastery is built by Nanmadaw Me Nu, Bagyidaw’s chief queen for the royal abbot Nyaunggan Sayadaw. Its architecture is in the simulation of wooden monasteries with multiple roofs and a prayer hall of the seven-tiered superstructure. It was also damaged by the earthquake of 1838 but was repaired by Hsinbyumashin, the daughter of Me Nu and a queen of Mindon.

Bagaya Kyaung Monastery is another monastery of a later date embellished with ornate carvings in wood. It is constructed of 267 teak wood posts. The exterior ornamentation is now lost through long exposure to inclement weather.
About a mile below the city is the ruins of the Inwa fort built during the reign of Mindon. It forms a triad with the Sagaing fort on the opposite bank and the Thabyedan fort above Inwa.
An old brick causeway leads from the south city gate towards the town of Tada-u from where one could reach Pinya which had briefly attained the pride of place as the capital of Shan kingdom.

Exploring Inwa With Out Local Expert

The ancient capital city of Inwa is one of the ideal places to escape from the hustle and bustle life to step back in time and discover ancient heritages. It is able to book well in advance. For more expert guides, see Exploring Inwa. If you want to go deep to the cultural heritage of Inwa, we recommend you to take an in-depth tour that is carefully designed by our travel expert like this Myanmar Nature & Wonder 11 Days