Located on Kabar Aye Road, Mayangone Township, Yangon, Myanmar; Kabar Aye Pagoda or World Peace Pagoda in the local name is one of the stunning attraction to visit on a day trip from Yangon. This is the 35 meters (117 ft) high and colorfully decorated pagoda. As its name implies, the pagoda is dedicated to the realization of global peace.
Compared to other pagodas in the region, Kabar Aye Pagoda is a relatively newly-built monument. Its construction was erected in 1954 by U Nu, one of the earliest prime ministers of free Myanmar, in dedication to the Sixth Buddhist Council (1954-1956). It was not until 1956, after 2500 years of Buddha’s passing into the Nirvana, the structure was finished.

Kabar Aye Pagoda is such a significant structure in Yangon for the Sixth World Buddhist Synod, who held 2500 birth anniversary of Buddha’s enlightenment. Due to its unique features and sizable structure, the pagoda is considered one of the most sacred sites in the country. Due to the fact that the vast majority of Myanmar people are Theravada Buddhist followers and deeply devoted to this religion, this site is an appealing place for pilgrims. Endowed with the significant size and the peace and quiet environment, the Kabar Aye Pagoda compound houses a number of monasteries and devotees within.

Kabar Aye Pagoda is a great monument measuring 111 feet high and 34 meters broad. The circular platform around the main pagoda is bounded in the manner of a cave-temple. This sacred place is adorned with five porches beautifully decorated in the conventional norm of flamboyant arched pediments including lotus flowers, lotus buds and the swastika motif in carved stucco. This monument also features subsidiary smaller pagodas on the five porches each 8 feet (2.4m) high. The Kabar Aye Pagoda monument complex stretches over a large area consisting of many monasteries, and the stairways to the pagoda are full of vendors on both sides selling many hands made products to incoming devotees.
Apart from that, the Buddhist Art Museum, Maha Pasana Cave and newly built Wizaya Mingala Dhammathabin Hall are also must-sees situated in the same precinct. 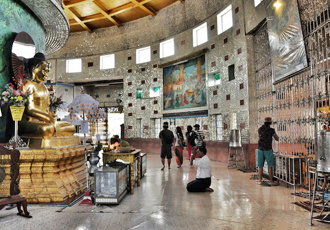 The Buddhist Art Museum at the Kabar Aye Pagoda displays a wide collection of religious paraphernalia and Buddhist texts, making it a good place for scholars around the world to gain insights into different mudras and gestures of Buddha Images.

To the North of the World Peace Pagoda lies a great artificial cave with 455 feet (138.32m) in length and 375 feet (114m) in width. The internal dimension of the cave is 220 feet (66.88m) x 140 feet (42.56m). The cave was modeled on the “Sattapani Grotto” near Rajagaha city of India which was the venue for the first Buddhist Synod or Great Council, held just some months after the Buddha went through the Decease. The initial construction of this cave traced back to 1953 and was given the name of “Maha Pasana”, meaning “Great Cave of Stone”. The cave was built to hold the Sixth Buddhist Council when 2500 venerable monks convened to recite and verify the words of the Buddha in Pali. Until now, it functions as the venue for major religious ceremonies like the World Buddhist Conference. The assembly hall of the cave has the capacity to accommodate around 10000 people.

The Gems Museum is located about 10 minutes walk from the Pagoda.