According to the official counts, there are 135 ethnic groups in Myanmar, but some say there are even more, with different languages, traditions, and costumes from each of their neighbors. One of the most famous ethnics that you might want to spend time to meet in your Myanmar vacation is the small group of Kayan people, well-known for the brass rings in women’s neck.

The Kayan are descended from the Tibeto-Burman parentage, member of Kayin Ni race (Red Kayin). There are four main Kayan groups: the Kayan Lahta, the Kayan Ka Ngan, the Kayan Ka Kaung and the Kayan Lahwi. The last group is more well-known than others in Myanmar with the name Padaung (or Padaung to the Shan people) meaning copper neck.
In the past, the Padaung have been called giraffe women-a less pleasant name given by foreigners. Over the years, the habit of wearing coils on their ankles, wrists and especially their necks have suffered curiosity from foreigners but many ethnographers and snap-happy tourists are interested in their strange appearance.

Before sleeping, the Padaung women take off the coils but some say that once she wears the coils for a long time, her neck muscles will be too weak and she even cannot hold her head without it. In other words, the coils are considered as her life.
It is said that the coils lengthen the neck, but in fact, it works the opposite way: they weigh the shoulder bones down rather drag out the chin upward, make the necks fit up to 26 loops of brass about 6.8 kilograms (15 pounds). They wear them from five or six and add more new rings when their body grows in the late of teenage, distort the natural structure of collarbones. 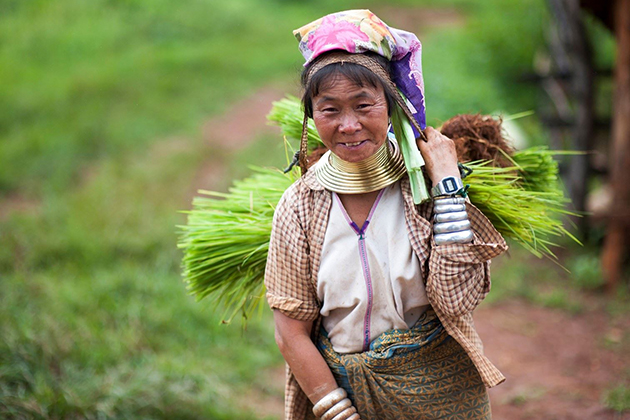 Many Padaung are permitted to live over the Thai-Myanmar border and their living area becomes tourist attractions. The Padaung women are hired by tourism businesses, paid money monthly to wear the coils then the tourists must charge for visiting, taking the picture and hopefully sometimes buying their delicate handiwork. However, this complicated arrangement has two aspects: it provides enough money to supply education and a better future for children displaced by war; In the other side, it is faced to criticisms as it looks like a kind of zoo for ethnic people. There is still no certain answer for this issue as it is up to each tourist to decide the best way to contribute to the local economy and learn about the local practices sensitively and respectfully.

In Myanmar, Kayan – including Padaung can be found in popular tourist sites, Inle Lake as well as Shan State so that you have a chance to meet and learn about their history without visiting Thailand. But why don’t you come to their motherland – Kayah State, Loikaw capital to find out where did these traditions originate?
You can travel overland from Mandalay or Nay Pyi through Shan state along Pin Laung-Loikaw road or follow Taung-Demawso through Taungoo town in Bago region. It means crawling along narrow winding hills with the speed 15 km/h. If you are the adventurous person, you are recommended to conquer the steep slopes and sharp curves to find the new route. 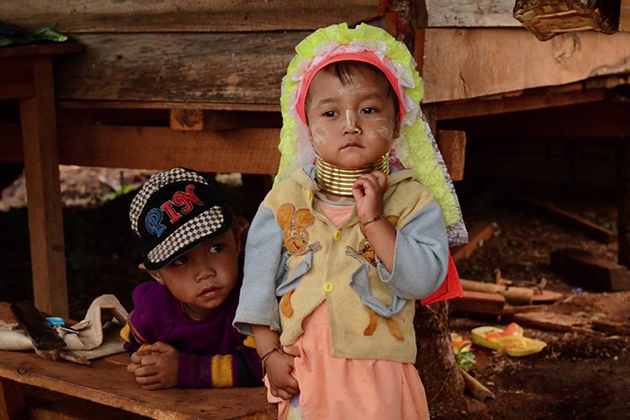 Flying from Yangon to Loikaw airport

Loikaw-a small city about 20.000 people, you will not feel difficult when finding the accommodation. Lots of restaurants, hotels, guest-houses bring the convenience for local and international visitors. Traveling is easy if you hire a car and driver, a motorbike or a trishaw-a sort of bicycle with the sidecar. Don’t miss the colorful marker and be sure to enjoy the display of traditional artifacts and handicrafts made by local people.
Besides, there are many things to see on a day trip from Loikaw. Lawpita fall – about 20km away-is a place to supply power for the country’s main hydropower station, generating a quarter of the country’s hydroelectricity.
Taung Kwe Zedi Pagoda, another landmark of Kayah State, sits on a twin-peaked mountain. Standing on this pagoda, you can see the whole city nestles in the mountainous countryside with each stream and hill having its myth and legend. 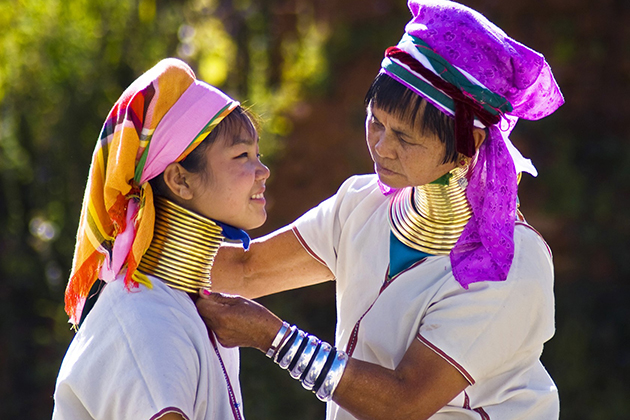 There are three famous mountains: Golden mountain, Silver mountain and Ruby mountain in the South of Loikaw, through Demawso town. They are well-known by the romantic story Dwe Me Naw about Kinnari and Kinnara, mythical birds in human heads and torsos. The mountains can be seen from Ngwe Taung dam and the shrines of the seven sisters of Dwe Me Naw are nearby with some different styles than usually seen for nats or spirits in Myanmar.
Hti Pwint Lake (or “spreading umbrella” lake), located in the area of the shrine and sometimes, you can see mud in the lake bubbling up like blooming flowers then fading gradually.
If you want to visit some Padaung pagodas, try San Boon Han Tha Khu or Pan Pet village. You will find more thing than just a coil as Padaung people have a rich melting pot of traditions unlike any other places in the world.
For example, you can be surprised when exploring this area with a strong Christian tradition. In the early 19th century, Italian Catholic missions came to in the area. Up to now, there are over 300 Catholic Kayan villages, 40 Buddhist Kayan villages and some part of the old churches built by the original converts. 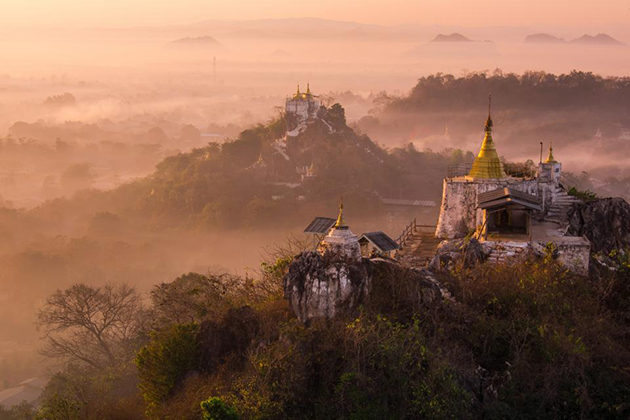 However, not many Catholics in the world can celebrate the most famous Kayan festival-Kay Htein Boe. In the last three days of March or the beginning of April, local people cut down the long straight tree in the forest, remove all the branches and bring it to the village for gathering together, dancing and praying. They pray for better crops in the next season by using a palm-leaf book and a chicken bone to predict the result.
Kay Htein Boe is one in many Kayan festivals including New Year, Christmas, Kayan and Kayah National Day. All these days are celebrated ebulliently with unique dancing style and happy traditional songs.

Pan Pet is the most attractive village for tourists among other Kayan villages nearby Loikaw. With the height over 1200 meters (4000 feet) compared to the sea level, Pan Pet looks like a new world that brings a fascinating-look into traditional culture and livelihood of this area.
Most houses are raised up from the ground with the same height as the person. Residents live by cultivating, wood gathering and gardening. Farmers grow corn, paddy, soya-bean and pigeon pea and also raise cattle like pig and poultry. To supply their diet, they hunt animals from the forest including barking deer, sambur, rabbit and wildcat.
If you enjoy a meal with them, you can be given khaung yay – local wine – like a present made from rice and corn. Let try a little, it is an intoxicating brew! 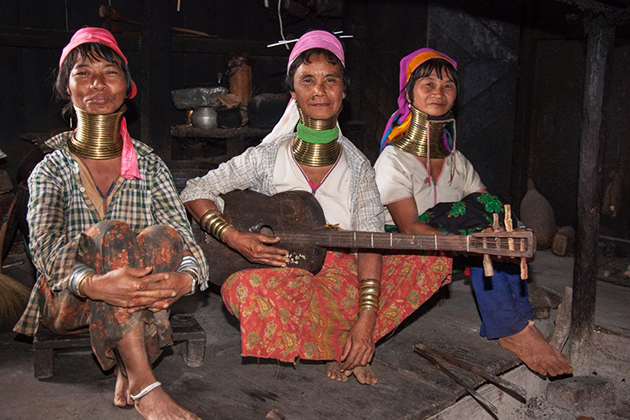 Today, many Padaung people are curious about how long the neck-coil tradition lasted? When the culture becomes less isolated, Kayan are standing on the crossroad if the next women generation and their daughter will take the coil
Coming to Loikaw will prove that there are much more interesting things than just their coils. You will not feel weird when seeing women with the long neck-coil but remember the weaving skills, the sound of pounded rice and all the hospitality of people here.