It has been a century since the last king of Burmese staying in the Royal Mandalay Palace. To date, it has been restored several times and become one of the most popular attractions to visit in Myanmar tours. Once witnessing the charm of the fabulous architecture and learn more about its history, it ensures to deliver you an interesting experience in the Golden Land of Myanmar.

The palace itself is at the center of the citadel and faces east, between 12th street and 26th street, it is the last palace built by Burmese Royal.
The Mandalay Palace was constructed from 1857 to 1859 when King Mindon Min chose Mandalay as the capital in 1857 after transported from Amarapura. This is the last palace built by Royal in Myanmar and the last residence of Burma’s Monarchy under the reign of King Mindon and King Thibaw.
The Mandalay Palace has experienced a tough long time since being constructing. It was just Royal Palace until 1885 when the royal family was expelled by British colonialists. There are a school of people thought that they are living as exiles to India.
Then, it was utilized as a garrison for British’s army. During World War II, Mandalay Palace has installed a military camp of Japanese, which then was bombed by the allies until nothing was left of the ancient palace buildings.
In 1990, the palace center’s area had been rebuilt. Nowadays, the Imperial Palace is completely under control and occupied by the Myanmar military.

The Reason Why Mandalay Palace was Constructed?

Mandalay is known as the second largest city of Burma, which was constructed in the IXX century. It located in Mandalay Hill – the highest hill in the city. According to Burmese’s legendary, it is believed that the Buddha had ever put his feet on this sacred hill.
Therefore, Burma’s king let a new palace sit at the bottom of the hill to commemorate the 2,400 years of Buddhism present in the world. This is King Mindon Min who had the ambition to turn this region into a “Buddhist capital of Burma”.

The Architecture of Mandalay Palace

Cover an area of 413-hectare, the Mandalay Royal Palace is renowned for its solidly and extremely sophisticated wall system.
Because Mandalay Palace is the royal residence of King Mindo and King Thibaw (the last two kings of the country), all the parts must be magnificent in the center of a large complex and were built by gilded teak wood.
The complex was surrounded by 4 huge walls which covered by 60 meters in width, 2 kilometers in length, 8 meters in height, and 3 meters in thickness with artillery launchers. Since World War II, bombs have ruined mostly the inside of the palace, however, the wall still stands and remains until now.
The palace has 12 gates which represent 12 zodiacal signs. Three gates are arranged for each wall, between the doors and the corners. Besides, there is a moat outside with 64 meters wide, 4.5 meters deep and a series of bridges. It is believed that previously, under the moat, there was a system of spikes in order to trap the enemy in case of being attacked.
In the complex, there are a good collection of queens’ chambers in the North, South, and West. The complex is surrounded by high walls, with ramparts, moat, water, and gardens. It is decorated with items such as royal elephants.
The whole inside the palace is filled with artifacts which are showcased in glass boxes, reproduction of thrones. Some rooms of the palace display statues of King Mindon Min and his successor King Thinbaw Min. 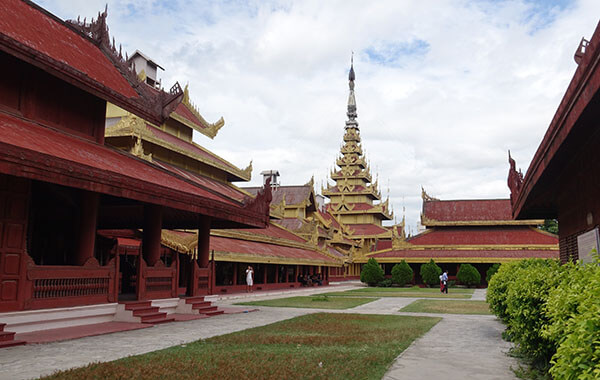 Mandalay Palace seems to be more sparkling and beautiful as it is surrounded by a moat, Sagaing Bridge, the lovely Ayeyarwady River. 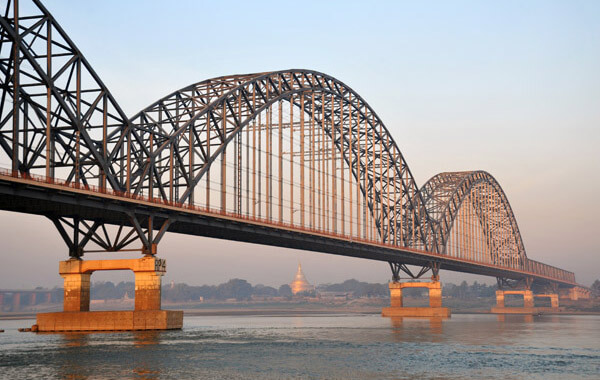 How to go to Mandalay Palace?

Mandalay Palace is located in Mandalay. To get there from a Mandalay tour, you can use taxis or buses, pedicabs or Mazda pick-ups.

When should you visit the Mandalay Palace?

Weather in Mandalay is divided into rainy and dry seasons, so the best time to visit the Mandalay Palace is on dry days between November and February.

How long should you visit Mandalay Palace?

You should spend at least 1 hour to 3 hours or half a day to discover the Mandalay Palace, and combine the visit to famous tourist attractions in the vicinity. 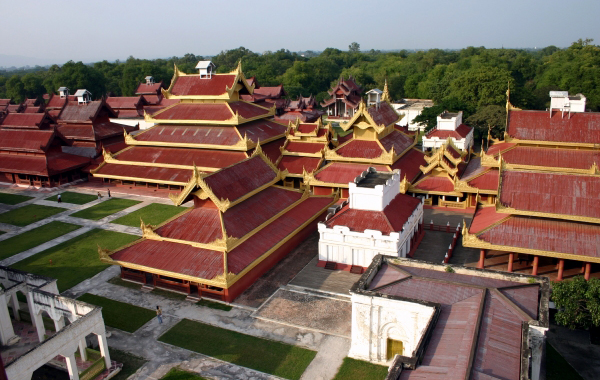