Nestled at the base of the southeast stairways to Mandalay Hill, about 274.2 m from the foot of the hill, the Kuthodaw Pagoda or Maha Maha Lawka Marazein Paya is figuratively called the world’s largest book. It is the large walled complex, includes a stone umbrella to shelter each standing inscription slab and protect them from inscriptions through time and changes. For a long time, it has become one of the best places to put in any itineraries of Burma tours

For the Burmese, Kuthodaw Pagoda is also known as Maha Maha Lawka Marazein Paya which was built by King Mondon Min at the same time the Royal Palace was built. It was started constructing in a short period of time, after the founding of Mandalay in 1857.
The King tent to build this fabulous structure as a heritage for their offspring and their people. Kuthodaw pagoda seems to be similar to the near Sandamuni Pagoda, which also has large zedi and a great number of inscribed marble slabs.

It’s 57.27 m in height and was finished with the construction complex of three great walls in M.E 1224. Inside these three walls, in the 5.26hectres wide area, the Buddhist scriptures of the Three Baskets were carved on stone slabs and included in shrines. The pagoda is in the complex of 729 Pitaka pagodas and shrines. This task of the meritorious deed was completed in M.E 1230. Around the pagoda, about 0.46m of the slab was built. Each shrine has a slab that is 1.5 m wide and 12-15 cm thick and was carved from white Sagyin Hill. Several sources suggest that the Fifth Buddhist Synod, which King Mindon called in 1872, plays an important role in the development of the Kuthodaw. A meeting of 2,400 monks from throughout the country was held that both verified the texts and started the construction of the encasing shrines.
The main entrance is the South gate which was based on sculptings of deities, as well as animals from Buddhist and Hindu mythology, has been decorated with gold and red as the main colors. Next to the gate is a long covered corridor that leads to the central side.
However, in 1885, the British had occupied Mandalay and used the Kuthodaw as a military base. Moreover, the invaders destroyed the complex of the pagoda and stole all the explosive possession such as gold, jewels inside the pagoda or were stuck into the slabs as letters.
The government ordered to restore it thanks to the Burmese’s donations as soon as the British left, but it was difficult to return the Kuthodaw to the original appearance. For example, they used black ink instead of attaching the new gold letters on these marble slabs.

Kuthodaw Pagoda is also known as “the world’s largest book” because there is 729 shrines were erected around the pagoda. Each of them is a single marble slab whose 2 sides were inscribed with Burmese scrips. Therefore, the Kuthodaw pagoda is regarded as the largest book in the world of which each slab is like a page.
The scrips were written on the slabs originated from Sutta Pitaka, Vinaya Pitaka, and Abhidhamma Pikata. All of them have contributed to making up the Tripitaka, the Buddha’s teachings by ancient Pali language that was first written on dried palm leaves.
It took 8 years to complete since 1860 when King Midon ordered to build. The white shrines are lines in rows together with large corridors between them. Besides, there are 4 entrances on each side of the pagoda which are decorated arches over them.

Kuthodaw Pagoda opening hours:
The pagoda opens daily from 8 am until 8 pm.
Kuthodaw Pagoda entrance fee:
US$ 5 per person.
Note: Tourists are noticed to wear long and preserved clothes when visiting the pagoda. 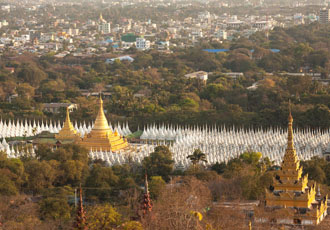 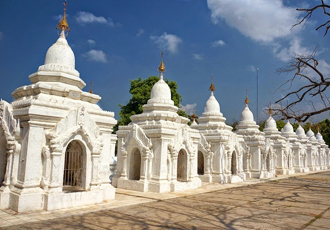 When taking Mandalay tours, visitors can combine Kuthodaw Pagoda and Kyauktawgyi Pagoda together. The Kyauktawgi located next to the southern entry to Mandalay Hill, Kyauktawgyi Pagoda is known as “Great Marble Image”. It was constructed by King Mindon from 1853 to 1878. The pagoda is famous for its large seated Buddha image made from green marble in the Sagyin, Mandalay.