Burmese people have a long tradition of culinary which still remains until now, among many modern dishes entering the country from different parts of the world. Actually, tourists taking a Myanmar tour often prefer to enjoy traditional foods instead of modern ones. This is an agricultural nation in which rice is the main crop, also is one of the largest exporters of rice in the world. Therefore, each meal often has rice, eaten with soup, salad, fish, meat, and vegetable cooked by Burmese people with their own recipes. They believe that if they lack fish or shrimp in a meal, they cannot eat well. In addition, Myanmar often eats drily as they may not need soup in the meal. This is also presented in the way they eat. The gadgets for in the meal is chopstick or they even use their hand to eat. They also have a spoon, but not much used.
If you want to try simple but traditional Myanmar food, don’t hesitate to join a meal with the hospitable locals here.

Myanmar local cuisine can be broadly divided into dishes found in ‘lower Myanmar’ (the surrounding of Yangon and the delta), with more fish pastes and sour foods; and ‘‘the upper Myanmar’ (Mandalay), with more sesame, nuts, and beans used in dishes.

In Mandalay, Shan State and around the Inle Lake, the most common dishes that people cannot miss are Shan-style rice noodles with curry, various fish and meat salads or Shan-style noodle soup which is served as thin rice noodles in a light broth with chunks of chili-marinated chicken or pork. Noodle dishes are familiar with Burmese people in breakfasts or light meals among the main meals of the days. A specialty that tourists should not miss is myi shay, which is made from rice noodles and serves with pork. Another one worth noting down is ‘kneaded fish rice’, a turmeric-tinged rice dish.
In villages of the Inle Lake, local specialties such as Htamin jin, containing rice, boiled fish, tomato and potato – has fresh ingredients that are entirely sourced by residents.
Since having a number of large rivers, port cities together with an extensive coastline, seafood and fish are greatly consumed. At coastal towns and resorts such as Mawlamyine, Ngapali and Ngwe Saung, lots of delicious fish and shellfish, caught by local fishermen, are served at restaurants every day to suit all budgets.
Other specialties include Kachin fish, steamed in herbs, in northern towns such as Myitkyina. 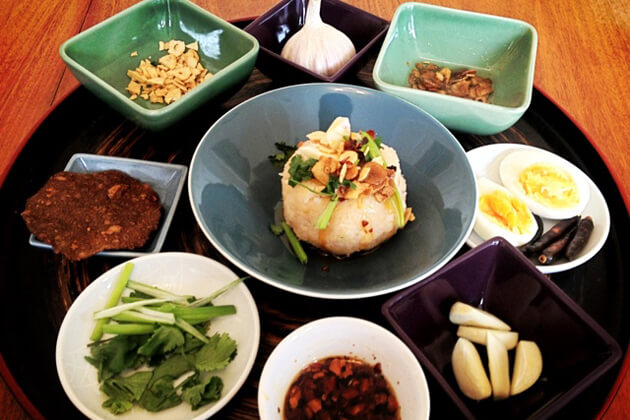 Being an agricultural country, Myanmar dishes are abundant with vegetables and fruits. Therefore, it is much easier for Buddhist people to being a vegetarian in this country than any other neighboring Thai Lan or Laos. Although not all Burmese are vegetarians, they still respect those who are.

Though food from meat plays a major part in most restaurants, you still can find one that serves vegetarian for you. If you can’t, there still have fried rice and vegetables (htamin kyaw teh ta loo) with an egg on top (jek oo) as a last resort.

Things You Need to Know Before enjoying Burmese Cuisine

– Some restaurants or food stalls may sometimes not have English menus, particularly in more remote regions. Be prepared with several Burmese names of common dishes or specialties.
– For preservation purposes, oil and salt are often put into the food more than usual, especially the curries. Should you find the dishes are too salty, you can definitely have a polite request to reduce the salt in your dishes.
– Instead of saying “excuse me” or “sorry”, a hissing sound will be of help to get the staffs’ attention.
– Locals often use hand or chopsticks (for noodles) rather than knives, which are used mainly in some expensive restaurants.
– Burmese restaurants tend to close early in the evening. If not in big cities, you are not able to find one opening after 9 pm. There are some hotels and restaurants serving only foreigners that may stay open later.
– A torch should come in handy when you enjoy your meal after dust because of the electric cut out for safety.
– If you can’t get acquainted with the local cuisine, another choice would be the Western one. However, it can only be found in big cities like Yangon, Mandalay or some major tourist spots with pretty high prices. Moreover, you can hardly find real coffee here but the instant coffee mix is served in most teahouse.