Kyey instruments are metal instruments used in Myanmar traditional music, which made instruments such as gongs and their functions vary in music. The main kinds including Kyey Se (Burmese bell), Linkwin (cymbals), Ci Wain (gong circle), Maun Sain (gong set).
Kyey Se (Burmese bell) can be found in ceremonies in temples, or monks use it when walking down the streets to begin the morning. The gong on the right or left side of the triangle is hit by a wooden mallet, so it spins with the high tempo and generates a vibrating sound. Relying on the size and where it is hit, the pitch changes.

Linkwin (cymbals) – punctuating instruments that are really similar to the conventional cymbals in other South East Asian music bands. Specifically, individual gongs are called Maung (gong), Wa Maung (gong), Teta Maung (gong), Kyey Naung (brass gong) based on their size. When the Maung gongs are being assembled together, they are called “ci wain”. Ci Wain (gong circle) is a smaller component of the pat wain drum circle and is associated to be played much easier. The 21 gongs get beaten by mallets, the higher pitched gongs get softened with the palm or the fingers in order to not over sound the pat wain drums.
Maun Sain (gong set) is sometimes called “gong rak” and dated back from the 1920s. It includes 18 to 19 bossed gongs that are arranged in up to 5 rows, hung into the wooden frames and put on the ground.

Kyo instruments are mainly composed of the Saung (harp), Tayaw(fiddle) and Mi Gaung (three-stringed musical instrument appearing as a crocodile). Firstly, Saung (harp) is categorized as an arched horizontal harp while the Western harp has a vertical resonator. A full-sized harp long 80 cm, wide 16 cm, and deep 16 cm, and the arch rises about 60 cm from the body. The body is made of padauk, the famous Myanmar mahogany. The harp body and stand are ornamented with pieces of mica (“Mandalay pearls”), glass, black and red lacquer. The harp’s flat bar is made from cutch wood. Saung (harp) is wrapped with the leather of deer. The Saung owns 13 to 16 strings, which are made of nylon or silk. Although the traditional silk strings have been replaced by nylon strings, silk-stringed harps can be found. 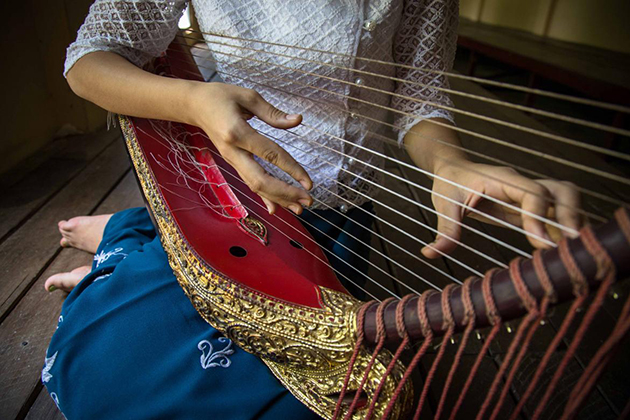 Secondly, Tayaw (fiddle) is a bowed string instrument, which dated back from the late of 19th century. The bowed Myanmar fiddle known as a ‘tayaw’ has disappeared from Burma, and the violin replaced it. Lastly, Mi gyaun (zither) is an ancient instrument of the Karen people of Burma. It famed from the 18th to 19th century, but it is not currently performed.

Thaye – Instruments Made of Leather

Lei instruments are wind instruments; it means they are played by blowing air into the instruments. There are 3 main types: Hne (oboe), Palwei (flute) and Khayuthin (conch shell). The Hne is a multiple reed oboe with an incredible crooked form. Two common sizes of the hne are “kalei” (small) and “ci” (big) are used for different purposes. The big one for slow tempo and gentle whilst the small one are used for festival occasions.

The palwei flute is a wind instrument that composes of a hollow tube. That can be played by blowing through a hole at the end of the hollow tube. Two kinds of Myanmar flutes include in the khin palwei and the kyaw palwei. Khayuthin (conch shell) is a natural shell with a hollow that produces sound when being blown. In the past, Myanmar people blow conch on occasions like a wedding, coronation or the ceremony for induction of monkhood.

Patala instruments are the Wa Patala (Wood Xylophone). The similar instruments could be found under different names Cambodia (roneat) and in Thailand (ranaad). 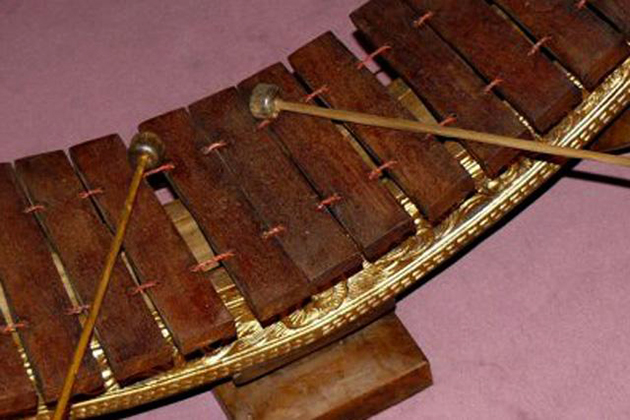