Myanmar is a country with ancient religious relics that brought greatness in size and architectural sophistication. Typically, the Shwedagon Pagoda in Yangon Golden, Golden Mount temple Kyaikhtiyo magic in the ancient capital Bago or 1000 population monumental temples in Bagan. In addition, Myanmar also attracts foreign tourists by unspoiled natural beauty, the tranquility of Inle Lake, Ngapali beach or unique practices tribe turtleneck Pa-O or cream Thanaka continue. With these advantages, but have just opened but Myanmar tourism industries are growing at a rapid pace.

Besides the flights, you can also choose to move between the provinces by bus in your Myanmar vacation. Remember to bring warm clothes because there are buses running at night, very cold air in the car. Taxis are convenient transportation in the city. Meanwhile, the rail system down, and the streets are not fully developed making rail vehicles and motorcycles are not suitable for really comfort trips.

Mandalay, the second-largest city in Myanmar after Yangon. It is a destination as well as a transition point for the most popular tours in Myanmar. The sights include Shwenandaw wooden monastery, Kuthodaw Pagoda with the world’s largest book, Mandalay Hill, Royal Palace, Temple Mahamuni Buddha studded with real gold leaf, U-bein Bridge. It is the world’s longest wooden bridge and monastery in Amarapura. 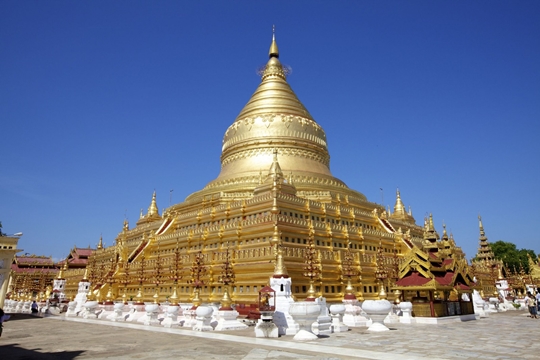 Mingun (Min Kun):
The village is located north of Mandalay. Mingun is famous for tourists due to Myanmar relics and ruins following: Mingun bell – the second largest bell in the world, stupas, and pagodas Mingun Pahtodawgyi, white Hsinbyume Pagoda / Myatheindan with subjects Chinthe.

Mrauk-U:
It is an important archaeological city located near the western border of Myanmar. Mrauk -U is the second largest temple center for tourism in Myanmar, after Bagan. Temples here are built of brick and stone, unlike the temple built of mud-brick and clay in Bagan. The typical temple-Shite Thaung, Htukkanthein, Koe-Thaung, Andaw-Thein, Lemyethna, Ratana’s Marble temple complexes. In this most monumental and most significant archaeological Shite-Thaung Pagoda.
Sagaing: The city situated 20 km to the southwest of Mandalay and on the banks of the Ayeyarwady River. Sagaing owns many monasteries and temples to appropriate places of pilgrimage tourism in Myanmar. Among the works in Sagaing, domed monastery Kaung Hmu Daw gilded quite different than sharp pyramidal architecture.

In Wa (Inhwa – Inwa):
located south of Mandalay, Inn Wa was the capital of the former kingdom of Myanmar from the 14th century to the 19th. The featured attractions are Bagaya Kyaung, the wooden monasteries, and the Nanmyin leaning tower.

Bagan:
Bagan is the center of the most famous temples in Myanmar. This place was the capital of the powerful kingdom of Bagan. With over 2,000 temples remaining today of 10,000 ancient religious architecture, Bagan is a destination not to be missed for visitors. The temples of Bagan’s most iconic Shwezigon golden temple, Ananda temple with four gold Buddha in 4 directions, Thatbyinnyu temple – the highest temple in Bagan, temples, and pagodas Shwegugyi Shwesandaw – where the hair relics of the Buddha.

The area between Mandalay – Yangon Routes

Inle Lake – Nyaung Shwe township:
Inle Lake, also known as the Great Lake, located in the town of Nyaung Shwe, is one of the best-known landmarks of tourism in Myanmar. In addition to the wonderful scenery of Lake Inle, you can visit the vineyards and wine production Red Mountain, the village of Pa-O turtleneck and Daw Oo Pagoda Phaung with 5 statues plastered with gold leaf.

Nay Pyi Taw (Naypyidaw):
The new capital of Myanmar. Here you can see the works for the State of Myanmar, is typically imposing Parliament building. There are also 3 giant statues of kings Anawrahta, U Aung Zeya Bayinnaung and Alaungpaya, along with Uppatasanti peace pagoda, where the relics of the Buddha’s tooth.

Pyay town:
It is situated on the banks of the Ayeyarwady River, with the main attractions is the sunset temple and pagoda Bawbawgyi Shwesandaw.
Southern Myanmar and Yangon

The beach in the Bay of Bengal
Tourism in Myanmar is just developing, but the pristine beaches in the country have begun to attract the attention of tourists who love beach vacation. The most famous beach in Myanmar is Ngapali, Ngwe bright, Chaungtha, and Kanthaya. Ngapali Beach is rated highest by blue waters and white sand beaches.

1. Tea Leaf Salad (lephet / laphet)
Fermented tea leaves can be served as dessert, or they can be catered to make Tea Leaves salad. Sour and slightly bitter tea leaves are mixed with cabbage, tomato, refried beans, chili, and garlic. This dish is eaten alone or served with rice are delicious.

3. Curry Myanmar (Burmese curry)
For Myanmar’s curry, we can choose the type of curry made from beef, fish, shrimp, pork or lamb. Along with countless curry dishes together like rice, salad, fried vegetables, soup, salad, and steamed vegetables, served with a range of different sauces.

4. Teashop Food in Myanmar
The Burmese teashop (teahouse) is not just a place to drink tea, but a place to explore the cuisine of the ethnic groups in this country. Burmese teahouse also offers a sort of pasta or rice including htamin thoke dish, a rice salad. Meanwhile, the customs of the Indians / Muslims serving dishes influenced by Asian snacks such as samosas and fried poori (deep fried bread served with potato curry) or toast nanbya (naan ). The Chinese restaurant here famous for the sweet barbecue or the sparkling puller, puller opens commonly found in dim sum style food

5. Myanmar’s Sweet Snack
Unlike Western sweets, the sweets of Myanmar collectively referred to as “moun” snacks severed like a snack rather than as a dessert. Moun is not sweet because of sugar but the sweet taste is fro, the natural ingredients such as coconut, coconut milk, rice flour, glutinous rice, pearl and fruit. Some typical dishes moun kin has nwin ghost (semolina cake with coconut milk, ghee, and raisins), and moun pyit bein moun thalet (Myanmar-style pancake).

6. The crispy fries
In Myanmar, you will find fried dishes everywhere. Typical dishes are buthi Kyaw (gourd fruits covered with flour and deep fried) served with a sweet and sour sauce made from tamarind pulp and beans.

7. Shan tofu noodles
One of the most unique dishes of Myanmar is called “hto-hpu new”, meaning “warm tofu”. The name sounds like this dish made from tofu but it made of chickpeas porridge made from chickpeas.

10. Shan Noodle
Ethnic Shan noodles made from rice, flat and thin fibers, which are embedded into the broth pepper, served with chicken or pork. This dish has a dried wheat version.