The current location of the National Museum of Myanmar is at No. 66/74, Pyay Road, Dagon Township, Yangon, Myanmar. The foundation of the museum dates back to 1952. Its current premises are where the Jubilee Hall used to stand. The relocation of this site to a more spacious building on Pansodan Street took place in1970. But these premises were not originally constructed to house a museum. The location of the present National Museum is on Pyay Road in a splendid five-story building standing on spacious and specially landscaped grounds. Even though the museum’s collection is appallingly labeled and lit invaluable ancient artifacts, works of art and historic memorabilia are worth a viewing. The exhibition is showcased in 14 halls on four stories. Three halls on the ground floor house exhibition on the evolution of the Myanmar script and alphabet, the spectacular 26ft-high, jewel-encrusted Sihasana (Lion Throne) which was dedicated to King Thibaw Min, the last king of Myanmar, and Yatanabon Period pieces. So far, this has been always one of the most important landmarks that used to put in the itinerary of Yangon tour packages.

The architecture of the National Museum of Myanmar

If you are a history explorer, you have gone to the right place. You could get a glimpse into the origins of the Myanmar alphabet, Myanmar script, and literature as well as those of the other national races of Myanmar. What’s more, a fascinating stone funerary urn of the period AD1 – AD 9 with Pyu writings on it in this hall is also well worth receiving your attention.

Then, head to the throne room where you will get chances to admire miniature models of the eight kinds of thrones of ancient Myanmar kings. What will probably seize your attention is the magnificent Royal Lion Throne of King Thibaw Min, the last king of Myanmar. This significant throne is made of smooth-grained “Yamanay” timber decorated with lions at its base. The whole throne is heavily gilded. This throne is always placed in the “Hluttaw” Hall (the Hall of the Council of Ministers). The king uses this throne when deliberating with his ministers on state affairs or delivering judgments on important issues. Later, make your way to the 19th century Yadanabon Period Exhibit hall, where you could marvel at clothing fashions, amenity and other household articles of the time. A 3-spire gilded-roof palanquin used by King Thibaw’s Chief monk is also on the display.

First Floor
The first floor of the museum features four halls. One hall showcases an impressive display of the royal regalia. The second hall features exhibits of historic significance; the third hall with exhibits of prehistoric times and the fourth makes rooms for exhibits on natural history. Visiting the hall of the royal regalia, visitors will get an opportunity to gain a glimpse into mind-boggling ornamented objects that hold a chef role in important royal ceremonies of ancient kings throughout Myanmar history. Noticeably, the royal gilded betel box which is embedded with valuable gems in the shape of a Brahminy (Hamsa) bird is the star example of the high standard of craftsmanship. 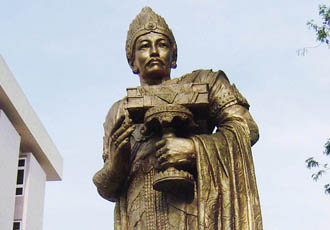 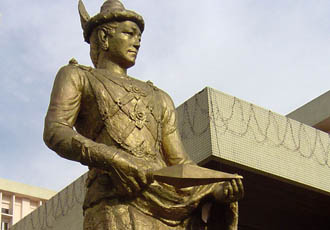 The hall of Myanmar history houses the pagodas, temples, monasteries and ordination halls of the Bagan Period and the marvelous murals of the Pinya, Innwa, Toungoo, Nyaungyan and Konbaung Eras. Here, you will get first-hand experience in exploring rare ancient votive tablets with moldings from scenes of the Jataka Stories that is the Lord Buddha’s birth stories.

The model of the 10,000-year-old Padalin Cave is placed in the hall of pre-historic times. In ancient time, men dwelt and etched drawings on its walls. This hall also accommodates stone weapons of the Neolithic Period and some bronze weapons of the later eras. Apart from that, there are clay pots, urns, votive tablets and necklaces whose history could be traced back to the Pyu Era that spans the period from the first century to the ninth century A.D. Beside aforementioned items, this floor is also the home to unpopular and valuable exhibits – silver chedis (stupas) found in the archaeological excavations at the ancient Pyu city of Sriksetra. They provide material evidence that Buddhism had flourished in Myanmar as far back as the ancient Pyu Period. Then, head to exhibit hall on natural history, you would see several fossils dating back millions of years. This hall demonstrates an exhibition of a truly rare find. The fossil of an anthropoid primate is expected to date back from approximately 40 million years ago. It was found in the Pondaung region of Upper Myanmar.

Second Floor
Exhibits on Myanmar culture can be seen on the second floor of the museum. This floor is spilled into 2 halls, one hall is assigned to Myanmar music, song, and dance, and the other is dedicated to Myanmar rural life. Seize your time in the museum to gain in-depth knowledge of the social, economic and cultural traditions as well as means of transportation of passed-by generations. Nowadays, you could see the presence of the Myanmar bullock cart in some rural areas. The utility cart is used to carry heavy loads of paddy and other agricultural produce whereas the cart used on ceremonial occasions is a thing of beauty decorated with delicate wood carvings. The cart is very light and dainty with streamlined proportions. It is used at pagoda festivals and novitiation ceremonies when its passengers are belles of the village dressed in their best finery.

On this floor, visitors could also admire the offering bowl for monks gilded and wrought with mosaics of semi-precious stones. The bowl is utilized for offering food and other comestibles to monks on religious occasions. In regard to the hall of music, song, and dance, a number of musical instruments and the ornate “saing waing” or drum circle, as well as marionettes, can be seen. These musical instruments were used in classical dramas and operas.

Third Floor
The third-floor houses 3 exhibition halls, 2 halls are spent on Myanmar paintings and the rest one makes room for ancient ornaments and jewelry. The Hall of Paintings is where you can gain insights into the evolution of the Myanmar art of painting. This hall features a number of artworks that were created in different periods of time ranging from the cave paintings of the Stone Age and down through the Bagan, Innwa, Amarapura, Konbaung and Ratanabon periods to 20th-century contemporary art. The works of famous artists are also on the showcase. 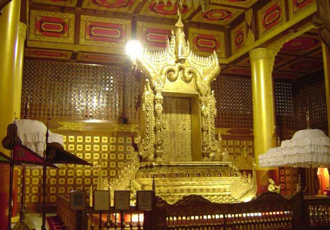 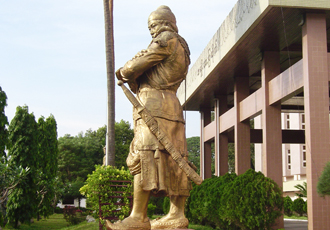 Visiting the third hall, museum visitors could have possibilities to enrich their knowledge with the individual ornaments and jewelry worn by the Myanmar people since olden times. Here you will see an ornament for the ears of the 18th century A.D. It is called a “Nadaung” in Myanmar and is a cylindrical plug that is worn by pushing it into the pierced ear lobe. It is an ancient piece of jewelry.

Fourth Floor
On the fourth floor are halls for the Buddha Images and for the display of the culture of the ethnic races of Myanmar. The Buddha images include those which date back to the Pyu Period and up to the present day. In the Hall of ethnic culture, you can see a colorful display of their national dresses as well as various artifacts that they traditionally use.

The National Museum thus is a treasure chest of priceless stone inscriptions. documents. carvings. paintings and a host of other artifacts that testify to the ancient culture and civilization of the Myanmar people. Anyone who has made a tour of the museum will come away with greater knowledge and understanding of Myanmar and its people.

Travel Tips for Visiting the National Museum of Myanmar

Attractions Nearby National Museum of Myanmar

The National Museum is located near some other Yangon attractions. The Shwedagon Pagoda is within a walking range of about 20 minutes from the National Museum. The Sein Gay Har Super Market also lies about a 10-minute walk from the Museum towards downtown. People’s Square and People’s Park is also close by about 10 minutes walk.