The former capital Yangon (Myanmar) is one of the most attractive destinations in Asia. Visitors will be completely conquered by the lakes, shady parks, and lush tropical plants. This is the reason why Yangon is also known as the “Garden of the East”. Even though it is no longer the nation’s official capital, Yangon – formerly Rangoon – remains Myanmar’s largest and most commercially important city. Its downtown skyline is dominated by the ‘winking wonder’ of Shwedagon Paya, a dazzling Buddhist temple that attracts pilgrims from all over the world, and especially a wide array of museums that showcase the culture and the history of this untouched country. When you set a plan to make your Yangon tours interesting, make sure to put these top 10 museums on your travel list.

Musmeah Yeshua Synagogue is known as the only site where Jewish can make their worship in Myanmar. This Jewish Synagogue blends with a lot of traders from different faiths at the surroundings. Musmeah Yeshua Synagogue is located right from the busy lane off 26th Street in central Yangon. Nowadays, this is the only Jewish house in Myanmar. The building was constructed in the 1890s to serve the 2,500 Jews, who migrated here from the Middle East. After the invasion of Japanese in World War II, the Jews were forced to escape from Burma and settle in other countries. The interior is quite spacious thanks to the high ceiling and graceful columns. The decor is kept quite simple with the Star of David being the main design. Musmeah Yeshua Synagogue is a special area where Burmese, Hindus and Muslims exist together happily and peacefully.
Opening Hours: 09:00 – 12:00 daily, Saturdays and other holy days open until evening
Address: No. 85, 26th St., Yangon (Rangoon), Myanmar Phone Number: 951 75062

The Bogyoke Memorial Museum was established in his honor in 1962, and it is well known as the “Bogyoke Aung San Museum”. Bogyoke in Myanmar is a term used for General. The museum was the home of the General before he was assassinated. It was known as a colonial-era villa and was built in 1921 and Bogyoke stayed there with his family, wife Daw Khin Kyi, sons, Aung San Oo and Aung San Lin, and daughter, Aung San Suu Kyi, about two years before his assassination. It is located at No.15, Bogyoke Museum Lane, Bahan Township, where Aung San Suu Kyi grew up as a child. As Myanmar people admired him so much, they always come to visit there, especially on his birthday – February 13; many people visit with great memorized feeling than other days. In this year Bogyoke’s 101st Birthday, there were about 800 people who visited Bogyoke Museum and museum authorities said it was more people than they have seen in previous years.
Bogyoke Museum, which is surrounded by big old trees, is quiet and peaceful. The Museum and grounds are influenced by Bogyoke’s life, such as his equipage, family living styles, great photos, his activities and his personal belongings in the Museum. One of the first things you will see as you enter the grounds is the car used by General Aung San. Visiting the museum in tours to Burma, go inside the museum you will see the household furniture set up as it was during the time Bogyoke lived there. 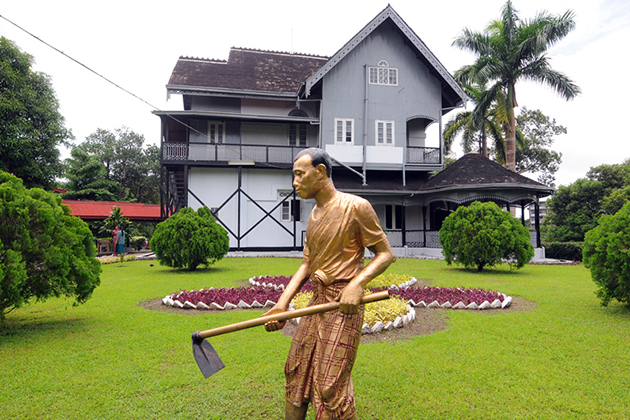 The National Museum in Yangon is an interesting place where Myanmar’s ancient heritage and culture are on display. It was established in 1952 and it is an imposing 5 story building and the exhibits cover 194800 sq.ft. There are over 4000 items on display, and more than 30 have detailed audio explanations in Myanmar, English, Japanese and Chinese. The museum has a rich collection of art and material culture of the indigenous people of Myanmar, royal regalia, musical instruments, decorative arts, and two art gallery.
Opening Hours: Tuesday to Sunday from 9:30 am – 4:30 pm and closed on Mondays and Holidays
Address: Pyay Road, Yangon (Rangoon), Myanmar 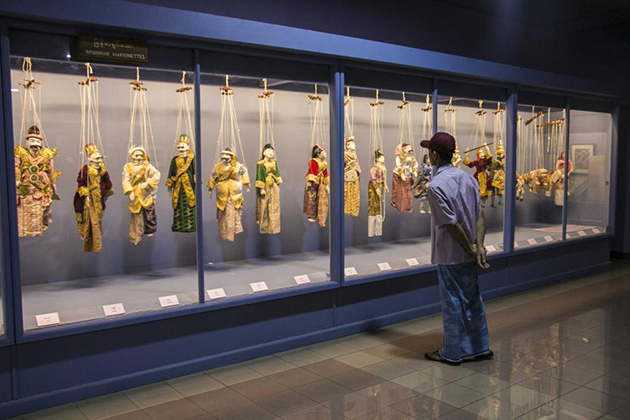 Myanmar Gems Museum, located at in Yangon, Myanmar, is a museum dedicated to precious Burmese gemstones. The museum is located on the third floor and inside the four-story building, near Kaba Aye Pagoda.
The Gems Mart at the Gems Museum consists of 82 stores on three floors, and sells high-quality raw and finished gem products, offering rubies, sapphires, pearls, jade and more. The mart is open from 9 am to 5 pm Tuesday through Sunday. The museum building is the site of semi-annual Myanmar Gems Emporium, attended by gems and jewelry merchants from around the world.
Opening Hours: 9:30 am to 5:00 pm daily. except for Mondays and gazetted holidays.
Address: 66 Kaba Aya Pagoda Road, Yangon (Rangoon), Myanmar Phone Number: 959252526830 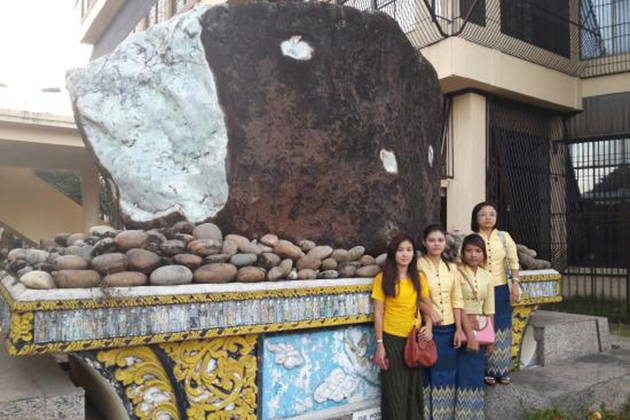 The Yangon Drug Elimination Museum is well worth visiting for its bizarre factor. The huge three-story building covers all facets of Myanmar’s own war on drugs, including the history of opium cultivation in Myanmar, operations launched against drug production, crop-replacement and economic development strategies in opium production regions, and education campaigns about the dangers of drugs.

Highlights are the quirky dioramas throughout the museum, random exhibits that require some interpretation as to how they fit in, and some morbid displays of the negative effects of drug use.
Address: Cnr Hanthawady Rd and Kyun Taw Rd, Kamaryut Township, Yangon (Rangoon), Myanmar Phone Number: (1) 505 260 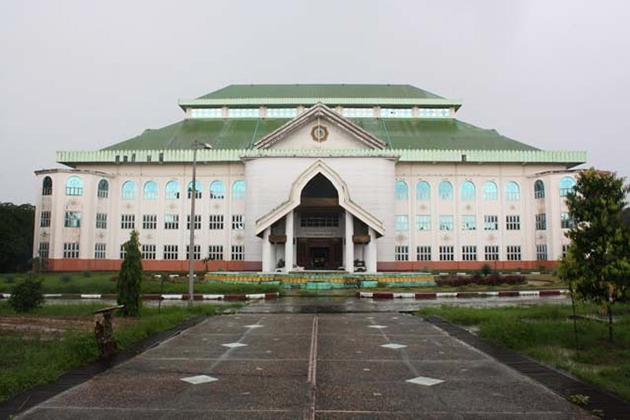 The house, owned by the government, is a colonial-era building within the Windermere compound in Yangon. U Thant lived there in the 1950s when he was Secretary to Prime Minister U Nu (whose official residence was nearby) before leaving to serve as Burma’s Permanent Representative to the UN in 1957. The Windermere compound has been home to many of the country’s top leaders since independence. In early 2012, President U Thein Sein approved a request from YHT Chairman Dr. Thant Myint-U that the house be renovated for reuse as a museum dedicated to the life of U Thant, as well as a center for public events, such as lectures and seminars, on issues related to the former Secretary-General and his work
It is used as a museum to U Thant’s life and works as well as a public event center since 2014. A “U Thant House Trust” was considered as a Myanmar NGO by the U Thant family and is now the official caretaker of the property.
Address: 31 U Thant House Lane | (Pan Wah Lane), Yangon (Rangoon),
Phone Number: +95 9 321 00785 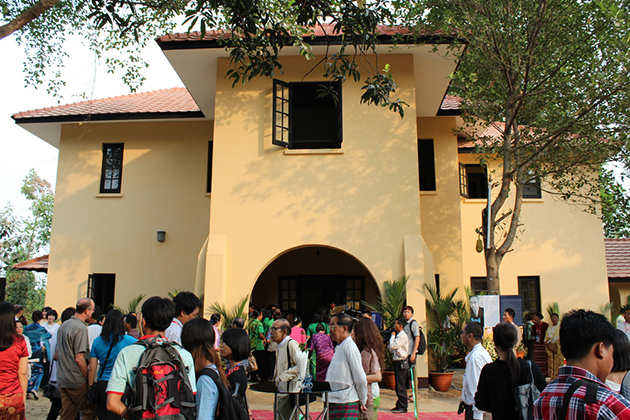 Nawaday Alley supports a number of different artists in Myanmar (Burma), hoping to capture the essence of Burma and Burmese people as it passes through time and through our fingers to a new beginning. Nawaday means ‘A New Day’, it’s an art gallery where people can come together and admire different ideas about life, society, art, and the world. It is escapism into imagination and a window of art to help our eyes see different colors. It is a sanctuary from the busy streets of Yangon that will give us hope and remind us – tomorrow is a new day.
Opening Hours 8:00 am – 6:00 pm (Sat, Sun: 11:00 pm – 6:00 pm) from Monday to Sunday.
Address: Nawaday Road, Dagon Township, Yangon (Rangoon), Myanmar Phone Number: 0943097918 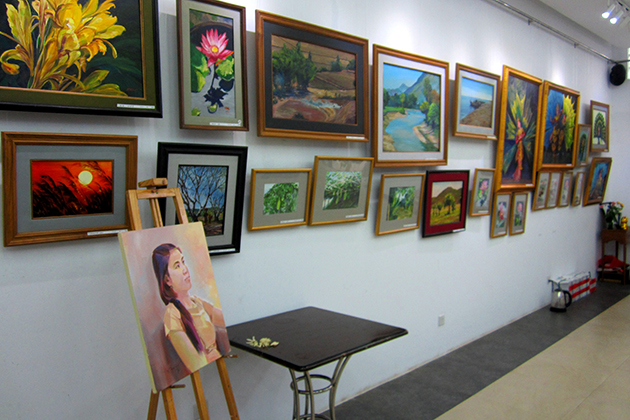 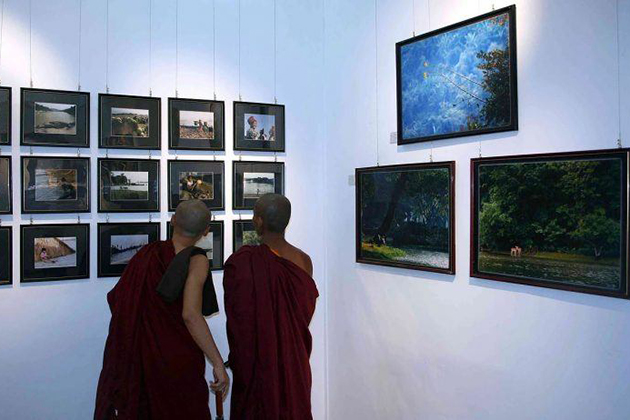 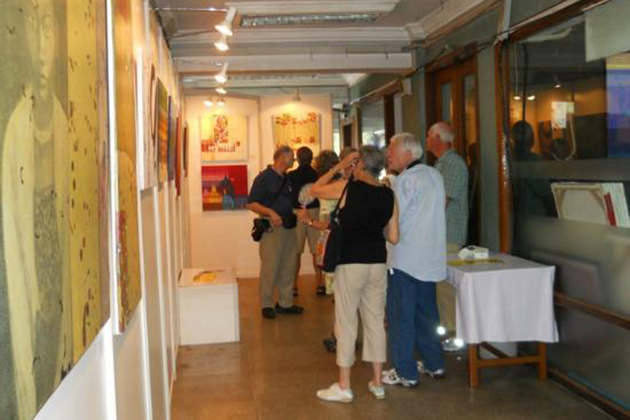 The Myanmar Motion Picture Museum is a film museum dedicated to the Cinema of Burma located in Yangon. It was established in November 1998 to display the efforts of successful film directors, actors, and producers in the motion picture history of the country.
Opening Hours: 9:00 am – 5:00 pm from Monday to Friday
Address: 16 Wingaba Road | Myanmar Motion Pictures Association, Yangon (Rangoon), Myanmar Phone Number: 1-544271 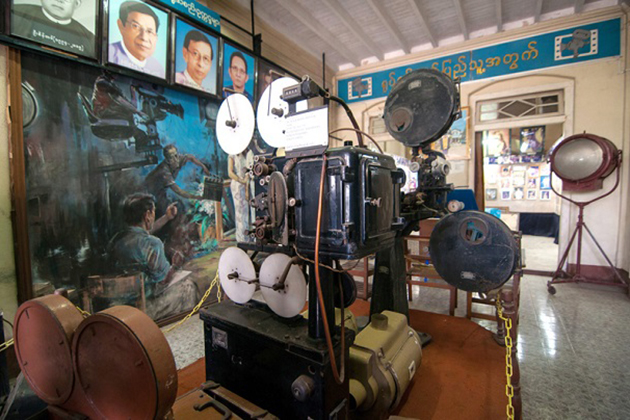