The architectural styles of Myanmar reflect the traditional pattern of neighboring, Western nations and modernization. The country’s most common buildings include Buddhist pagodas, stupas, temples, British colonial buildings, modern renovations, and Yangon architecture is a fine example of this exotic structure. The story of the old Yangon will be told through these constructions – a prism to look back.
In this article, tourists will have more information about the most noticeable architectures of Yangon which holds many historical and artistic values to list in the best things to do in tour Myanmar.

According to the local folklore, this 99-meter, time-honored and the gold-covered stupa is built in 600BC, sparkling beneath the sun and is noticeable from every corner of town.
It was built by the Mon people, who reside in the present-day state of Mon in southeast Myanmar, and founded a fishing village here called Dagon during this period. Today the Shwedagon (Shwe means gold) acts as the spiritual heart for Myanmar’s majority-Buddhist population.
Mon people is the father of Shwedagon (Shwe means gold), who inhabit in the present-time state of Mon in southeast Myanmar. Today, Shwedagon serves as the spiritual heart for almost all Myanmar Buddhist followers and one of the best places to visit in Yangon tours.
The first Englishman who paid attention to it was a dealer named Ralph Fitch in 1597, said: “the fairest place, I suppose, that is in the world” to emphasize the beauty, spiritual and material values of the stupa. Traders from the British East India Company as well as Armenian merchants started visiting this place in the 17th century. 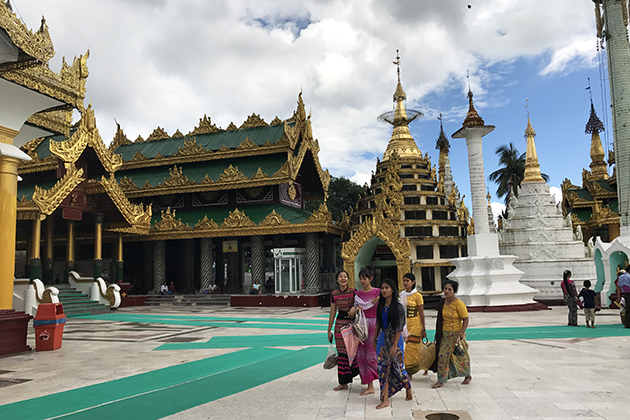 In the 1750s, Burmese King Alaungpaya unified and governed a concatenation of territories in the region – including Dagon – a former fishing village, through which some areas of the twenty-first-century Myanmar are merged. After that, the King renamed the town into Yangon which means “the end of strife” and it persists in being a small town until British colonization.
When the British overpowered Myanmar in the 19th century, Yangon served as their capital and cleared its marshy shores out to construct an important port city. The outskirts of Shwedagon were used to build their military headquarters – a dagger through the heart of Burmese pride to this day.

Built between 1889 and 1905, the Secretariat was considered as a symbol of British control over Myanmar. It was inspired by trends from Calcutta and provided with the best materials under the direction of Henry Hoyne-Fox – an engineer at the Public Works Department which are imported England steel girders and Marseille terracotta roof tiles. 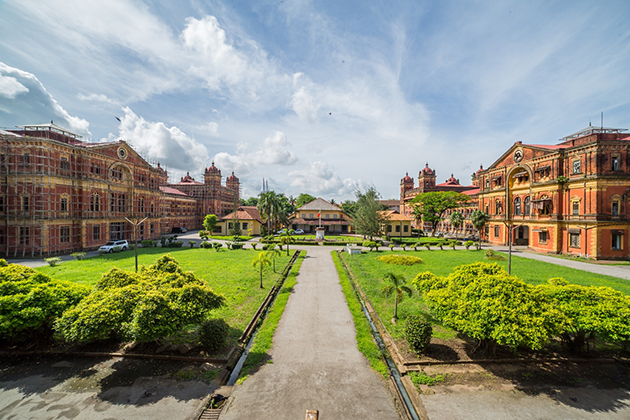 The edifice also was a symbol of Myanmar’s post-colonial fights, specifically the case of General Aung San – the nationalist hero who was murdered here, at this place, by the enemy only months before the country’s independence in January 1948. After the military coup in 1962, the Secretariat was forbidden to the public and covered by barbed wire.
Although there are some plans to encourage its reopening for the purposes of politics or tourism, the Secretariat today is still a glowing red-brick building that arouses the public’s curiosity due to its daunting aura.

This enchanting building was built in the 1950s – an ideal place for those who want to escape from the hustle and bustle of Yangon city. The story of a young nation that was looking to the time ahead will be retold in this place while sitting behind a fence and overgrown grass.
The first post-independence Prime Minister of the country, U Nu, summoned 2,500 monks across Asia for an important Buddhist synod which is a legacy-shaping effort for him and a big deal at that time for the country’s standing on the regional stage. Particularly, this library is in the ownership of the synod with the purpose of building a complex construction – the Kaba Aye (means world peace) pagoda.
Benjamin Polk – an American architect is the one who designed Tripitaka Library, he used lotus – a symbol of Buddhism to carve on every wall, of course, these lotuses are made of concrete. Additionally, he also took advantage of modern architecture which is obviously presented in the stylish cantilevers. 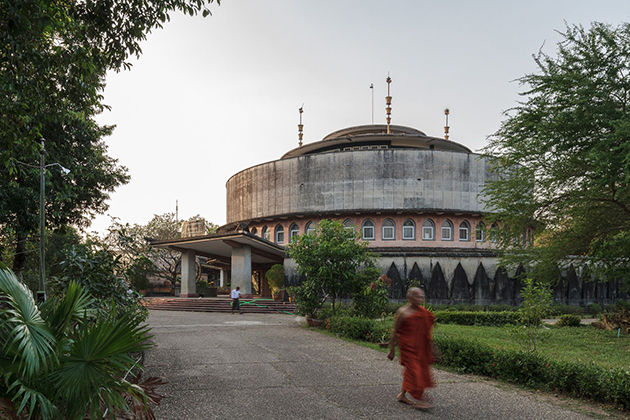 Located at the heart of Yangon, next to the Sule Pagoda, the City Hall was completed in 1936 after 10 years of construction under the direction of U Tin – a Burmese architect. It is considered as a great example of British colonial architecture and Burmese embellishment and presented on the Yangon City Heritage List. Today, the building serves as the Yangon City Development Committee (YCDC).
This purple-painted colonial building is a magnificent Burmese style building with tiered roofs called Pyatthat, with hti on the top and a ceremonial umbrella. The arched entrance is flanked with two Nagas, serpents from Buddhist and Hindu mythology to guard the hall. There is a traditional Burmese peacock and a Myanmar flag is set up at the main entrance to enhance the sovereignty. Additionally, beautiful palm trees surround the city hall creating a beautiful combination with the light purple window arches in the background. 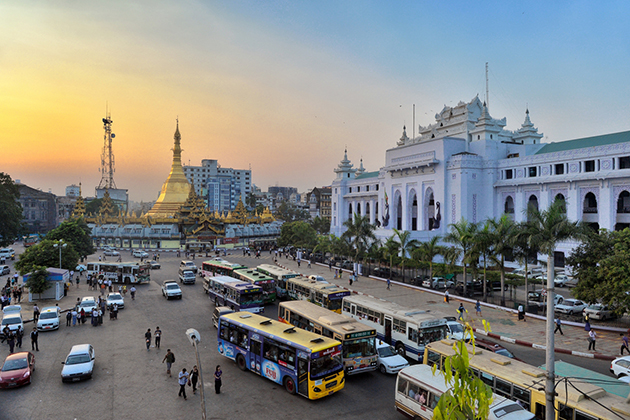 The military coup that officially ruled Myanmar from 1962 to 2010 decided to build an entire museum to present one of their stated accomplishments including the elimination of drug trade. This huge edifice has similar characteristics to pagoda architecture, especially the pattern of tiered roof and canopy which is rather offbeat by Roman Doric columns.

The outstanding feature of the military’s design in this Museum is the rustic and monolithic elucidation of elegant Buddhist architecture. Inside the Museum, there is a combination between the base propaganda and paper-marche dioramas illustrating people in various stages of addiction. In one display, a huge floating hand grasps a bunch of pills and a cigarette while a syringe sticks out of its wrist. This building was built on top of the huge local cemetery which is a metaphor for the bad ending of those who sink into drugs.

Yangon architecture is a remarkable trait of Myanmar which holds enormous historical and cultural values. The tourists are always wholeheartedly welcomed here, do not hesitate to book the Yangon tours to contemplate and explore these outstanding structures of Myanmar to learn more about the history as well as the spiritual and cultural merits of this sleeping country.