Nay Pyi Taw (or Nay Pi Daw) – The Capital City of Myanmar, in Burmese, meaning “royal capital city” or “throne” which lies between Bago Yoma mountains and Shan Yoma mountains with an area of 7.055 km2, away 3.2 km from the town of Pyinmana in the west and about 400 from km Yangon in the north. During the Second World War, Nay Pyi Taw is the basis for anti-fascist Japan of resistance forces in Burma.

Nay Pyi Taw officially became the administrative capital of Myanmar from the date of 6-11-2005. The official name Nay Pi Taw of the capital was announced on March 27th, 2003. Up to 2009, the people in the capital Nay Pyi Taw was about 925,000 people and Nay Pyi Taw becomes the third-largest city in terms of population in Myanmar, only after Yangon and Mandalay. 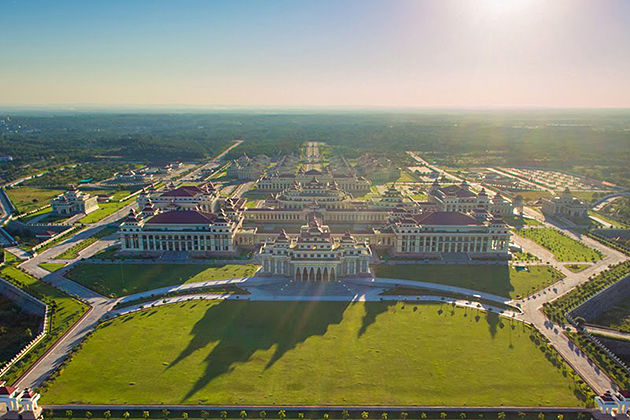 Nay Pyi Taw is one of the 10 youngest capital city in the world and was built in four years. The building process started in 2002 with about 25 construction companies involved. On November 11th, 2005, at 11:00 am, 1,100 trucks carrying 11 military battalions and 11 ministries of federal government left Yangon to the new capital of Burma. The central branches remaining completely moved to Nay Pyi Taw before the end of Dec 2009.

There are many different opinions about why the government decided to move the capital of Myanmar from Yangon to Nay Pyi Taw. According to the official explanation of the Myanmar Government, because Yangon was too small and crowded, there is no space to expand the capital. So they decided to move the capital to Nay Pyi Taw. Many argued that Nay Pyi Taw is located at a more important strategic position than Yangon that was the strategic transportation hub of the entire federal, which can reach other states more easily, strategic regions in the north, west, and east.

Some of Western’s diplomas supposed that Myanmar’s government is probably being worried about potential aggression in the future. Yangon has located closely the long coast, therefore, it is quite fragile and vulnerable if a true struggle happens. There is a school of Myanmar’s residents who said that the aggression warning has been predicted to the military headquarters.
Siddharth Varadarajan, an Indian reporter, had visited the new capital of Myanmar in January 2007 and explained that the vastness of Nay Pyi Taw can protect and prevent the country from the change of political regime. Thus, the infrastructure of Myanmar’s capital was designed to be a masterpiece of defensive urban planning. 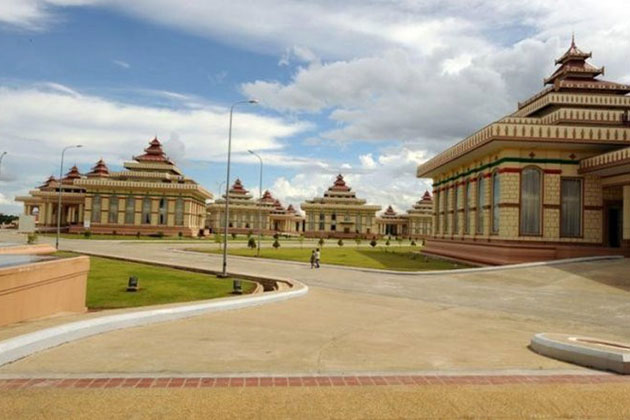 Traffic connection between the capital Nay Pyi Taw to commercial center – Yangon and cultural center – Mandalay is 4 to the 6-lane highway of 700 miles. In addition, there are other air routes connect Nay Pyi Taw with other tourist destinations of Myanmar such as Bagan, Heho, Sittwe, Myikyina, Kyaing Tong and other places. Myanmar’s government is urgently expanding Nay Pyi Taw airport into an international airport scheduled for completion in 2012; also plans to build a high-speed railway Nay Pyi Taw – Yangon serving local traffic demand.

In 2011, Nay Pyi Taw was known as one of 10 cities that has the fastest growing speed in the world.

The Capital of “Ghost”

Myanmar’s capital Naypyidaw is a huge area with the construction cost over $ 4 billion, however, the number of residents is much lower than in other cities.
Referring to Myanmar, visitors often think of Yangon or Mandalay – the Buddhist center, but not everyone knows that Nay Pyi Taw is the capital of the country.
Many tourists choose Naypyitaw as one of the destinations for their Burma tours because they are attracted by the wilderness. They argue that the most special thing about this city is nothing but the hidden houses and wide streets.

A 28-year-old Norwegian tourist who has been on a Naypyidaw Sightseeing city tour to this capital of Myanmar with his brother, they were enjoying the multi-lane highway and said: “Have you ever seen a highway with 20 lanes and no cars going?”. On large roads, there are only buffalo or sometimes a few motorbikes. 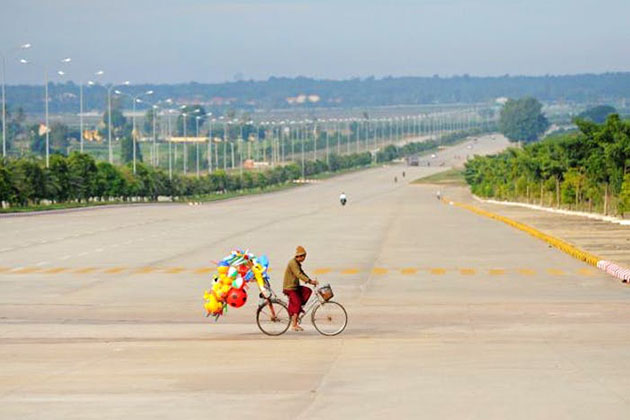 Compare to Yangon or Bagan, the Buddhist pagodas in the new capital of Myanmar seem to be a little lonely, deserted when there are no visitors to visit. The design of these is quite similar to the Shwedagon Pagoda in Yangon, but there is no abbot to govern.
To attract people to visit, recently, Nay Pyi Taw has held many large-scale events such as the Southeast Asian Games and World Economic Forum. Besides, it is paid more attention to service developments, people can have a large choice of standard hotels at reasonable prices (unlike in Yangon, where prices are pretty high).

Most conferences and events in Nay Pyi Taw are organized at one of the huge Myanmar International Convention Centres, which are close to the main hotel zones; they both have quick and free wifi. Unlike the rest of Myanmar, most of Nay Pyi Taw has round-the-clock electricity and most hotels have good internet speeds.

Most conferences and events in Nay Pyi Taw are organized at one of the huge Myanmar International Convention Centres, which are close to the main hotel zones; they both have quick and free wifi. Unlike the rest of Myanmar, most of Nay Pyi Taw has round-the-clock electricity and most hotels have good internet speeds.

Being a relatively new attraction in Myanmar in general and Nay Pyi Taw in particular, Uppatasanti Pagoda is one of the main highlights to visit in the new capital of Myanmar. The construction of the pagoda started in 2006 and finished in 2009. With 325 feet high, Uppatasanti Pagoda lends a significant dignity to Nay Pyi Taw. The main stupa enshrining a tooth relic from the Buddha, which was offered by China. 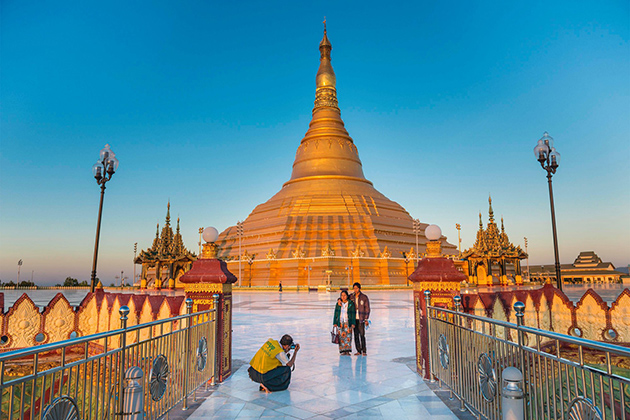 With 250 shops and other 400 stalls for greengrocers, Myoma Market boasts the largest trading center in Nay Pyi Taw, the new capital of Myanmar. It is a fascinating place to linger and capture the hustle and bustle life of the local people. Upon here, tourists can find a variety of goods such as food, electronic products, and traditional costumes, etc. Even more, this is also where you can find the special makeup powder of Burmese – Tanaka.

Located on the east of Nay Pyi Taw, the Water Fountain is a beautiful destination to visit while traveling to the new capital of Myanmar. The best time of the day to visit is in the evening when the fountains are light up with different colors. 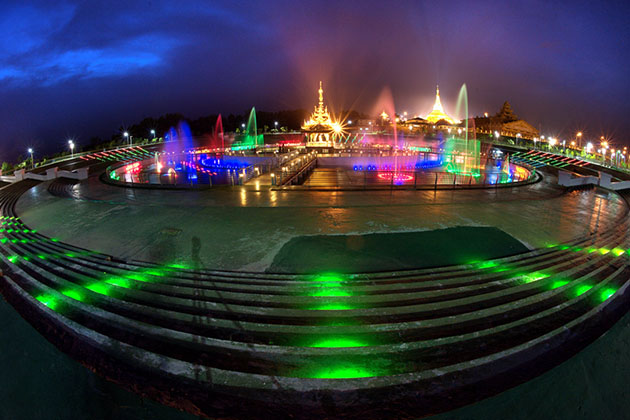